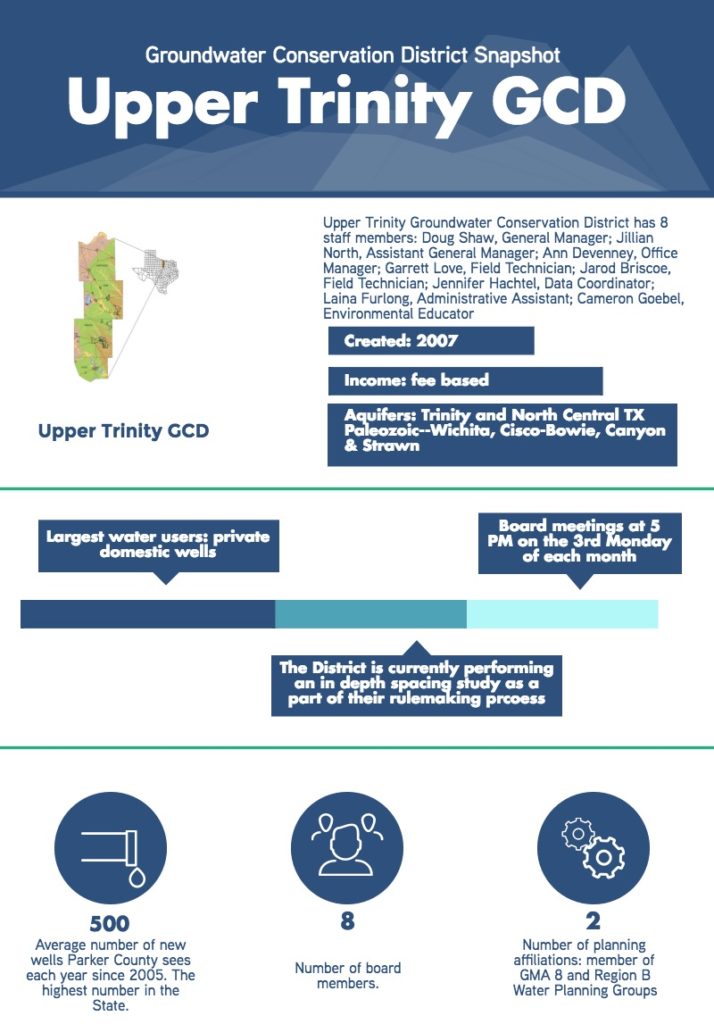 The Upper Trinity Groundwater Conservation District (UTGCD) was established in 2007, and currently operates under temporary rules. The District started the process of creating permanent rules in 2016. The District’s rulemaking process is premised on establishing a balance between protecting a landowner’s right to groundwater and protecting the resource itself. Several projects were undertaken to inform their rulemaking, which is scheduled for completion in 2017, including a well spacing study performed by INTERA.

The District has just received the draft results from an in depth spacing study that looks at potential impacts of new wells on nearby existing wells. The study looks at the separate layers of the Trinity Aquifer individually and by outcrop and subcrop. The study also looks at spacing impacts in the outcrop and subcrop of the 4 Paleozoic Aquifers. The varying geology of the aquifer means its imperative to study how the water will act at different locations within that same aquifer. For example, at the subcrop of the Trinity Aquifer, the water is much deeper, and the pressure created by the confining unit creates a much more prolific water well as compared to one on the outcrop of the aquifer. The data collected through the study will allow UTGCD to make informed well spacing requirements in their permanent rules.

The District is particularly proud of its education program. Like many groundwater conservation districts in the State, UTGCD has an educational trailer. District staff has put a lot of time and effort into this project, including designing it in-house. The trailer contains a model of the aquifer with several working
wells. The model simulates rain, which visitors can see working its way through the sand. The model also demonstrates how a well pulls water away from the sand and creates a dry area. The model also simulates how faulty casing in an injection well could allow potentially harmful material to be released into the aquifer where it could travel through the sands and be pumped by existing wells. The trailer also contains another model demonstrating well construction, graphics, and a native plant display. UTGCD has now been to every school district within the 4 counties the GCD serves, and many of the school districts are visited at least once every year, in addition to appearances at local events and festivals both in and outside the District. UTGCD believes that the only true way to promote, and in turn, achieve water conservation is through extensive education. It’s the District’s hope that if people can understand where their water comes from and that many sources of groundwater are being depleted faster than they recharge it will affect their long-term water use habits.

The District also sees the database as powerful workflow tool, making GCD operations more efficient. The database will not only manage well registrations, but will also allow drillers to submit applications to the system; allow rate payers to enter production data into the system, at which time the system will automatically generate an invoice; and allow UTGCD field techs to access and enter data into the system in the field, removing the step of uploading the data at a later time.