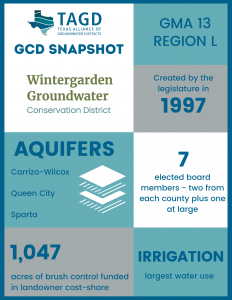 The Wintergarden Groundwater Conservation District manages groundwater in Dimmit, La Salle, and Zavala counties near the Mexican border in South Texas. This region celebrates its history – including its Native American influence, roles in the Texas Revolution and Mexican-American War, and service as a railroad outpost – while looking to the future. With the boom of the Eagle Ford Shale bringing more people and economic growth, the need to protect and conserve the area’s water supplies is greater than ever.

Wintergarden GCD has developed and implemented a robust scientific program over the past 15 years. The district has undertaken studies to evaluate sources of recharge, components to the water budget, changes in water resources over time, and water quality. Through these studies, the district has acquired a wealth of knowledge to contribute to the meaningful management of groundwater in the area. 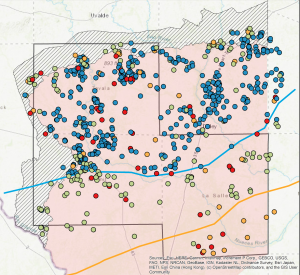 Values for total dissolved solids (TDS) from samples collected from the Carrizo-Wilcox Aquifer. TDS values are color coded. Contours for TDS values of 500 mg/L and 1,000 mg/L are established for naturally occurring water quality. Data from the TWDB.

At the beginning of the Eagle Ford Shale boom, the district decided to undertake water quality testing to establish baseline data in 2010. Sampling has been repeated three more times in the last decade, including one comprehensive study by the United States Geological Survey. The studies include recent water quality evaluations targeting local “hotspots” which are identified as water samples with total dissolved solids values that are significantly greater than naturally occurring values. Having this water quality data allows the district to accurately monitor the aquifers for any potential contamination. Likewise, if any members of the community express concerns with their water quality, Wintergarden GCD can collect water from the relevant well, analyze its water quality, and compare the values with the district water quality database to determine if the water has been degraded relative to the baseline water quality. In 2006, the Wintergarden GCD started a pilot study for recharge enhancement to the Carrizo-Wilcox Aquifer. The district obtained a Class V Injection Well Permit from the Texas Commission on Environmental Quality to operate a gravity-fed injection well. A gravity-fed injection well operates by rainwater filling a surface tank with a berm. Once that tank hits a certain capacity, the captured surface water flows into the injection well. The district plans to conduct a tracing study on the injected water to demonstrate the natural filtration capabilities of the aquifer. Because it takes significant amounts of rainfall to trigger any injection of this water, drought conditions of the past few years have prevented this recharge enhancement facility from operating.

Chapter 36 of the Texas Water Code requires groundwater conservation districts to address brush control in their groundwater management plans. Wintergarden GCD has leveraged local science to go above and beyond in this regard. From 2007-2009, the district partnered with Texas A&M AgriLife Extension, Texas A&M University, and Southwest Research Institute to conduct a variety of evaluations to determine the effects of brush removal on distributed recharge. After the studies identified which areas and which soils were most likely to benefit from brush removal, the Wintergarden GCD board developed a cost-sharing program that supports landowner efforts to control unwieldy plants that may be inhibiting aquifer recharge. Approved applicants can be reimbursed for 50% of brush control expenses, up to $5,000 annually. Methods of control include aerial spraying, root plowing, root raking, roller chopping, and rhome disking. To date, the district has approved 11 projects impacting over 1047 acres for the removal of mesquite, huisache, and prickly pear. Wintergarden GCD also offers funding to plug deteriorated and abandoned water wells, covering 75% of the well-owner’s cost. Even with this financial incentive, the district has found that few land owners understand the risks that these wells can pose to the community’s groundwater resources. This is among the reasons why the district has committed to public outreach to ensure that the district’s groundwater resources are protected into the future. 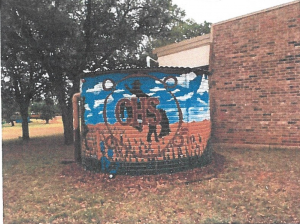 Wintergarden GCD has partnered with the Nueces River Authority to conduct an education program at local schools. Students are taught about the importance of water stewardship, about the area’s groundwater and surface water resources, and about how they can save water at home. They also get hands-on practice with those concepts as they explore their own rainwater harvesting demonstration. 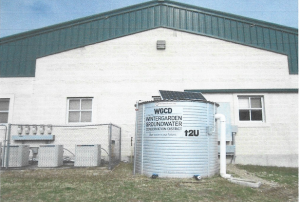 As part of the partnership with the river authority and the school districts, Wintergarden GCD operates 15 rainwater harvesting demonstrations, including one at every public school campus in the three counties. Each school has at least a 50-gallon rain barrel. The middle school students tend to take the most active role in maintaining the equipment, even painting and decorating the barrels to reflect their school pride. Nine of the schools have larger tanks with a capacity of 3,000 gallons or more. Teachers at the participating schools are encouraged to incorporate the rain catchment systems in their lessons, and to use the water to irrigate their school gardens. The La Salle County USDA-NRCS office also has a demonstration system with a 5,000 gallon capacity. No matter what the future holds, Wintergarden GCD will continue to protect the area’s groundwater resources through the use of science and education. To learn more about the Wintergarden GCD, visit the district website at www.wgcd.net.