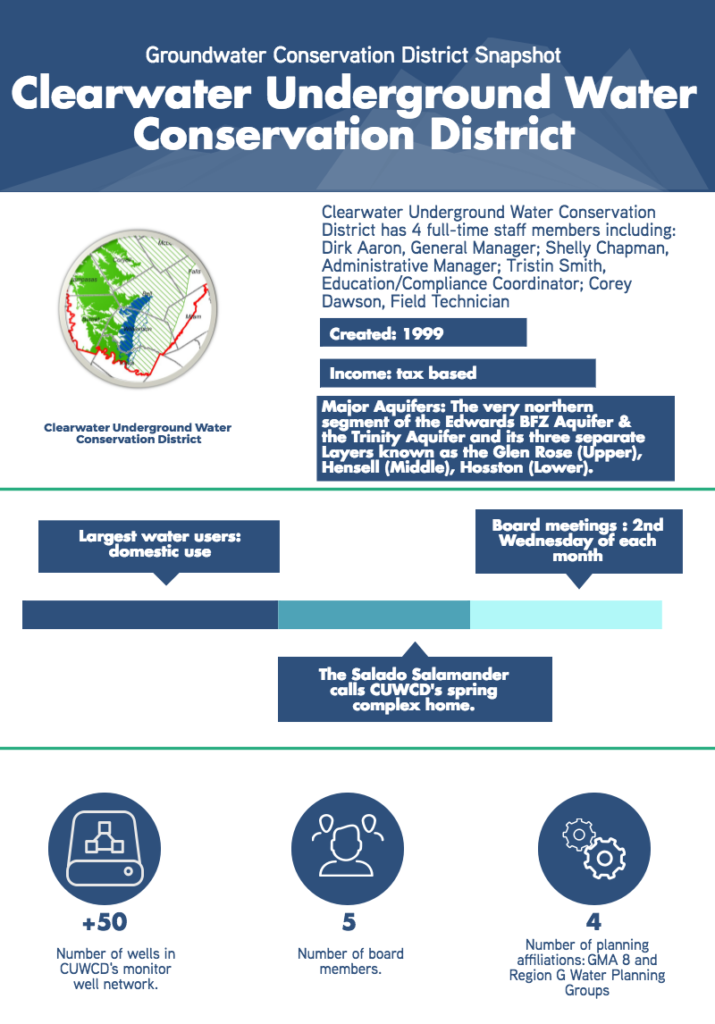 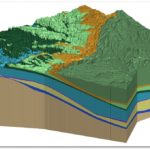 With both the Trinity and Edwards BFZ Aquifers located inside its boundaries, Clearwater Underground Water Conservation District (CUWCD) sits atop some complex hydrogeological systems. To better understand how these aquifers function, the District employs a 3-D hydro-stratigraphic model, Scientific evaluations using hydrogeologic reports, electric logs, pump tests and complex simulations of groundwater availability models using modifications with real-time transmissivity. The use of models and professional geoscientists collectively assures that the District makes informed decisions based on science and reality of the aquifer conditions. This allows for estimates of the CUWCD’s geological stratigraphy, including estimates of saturated thickness, water levels and water quality changes over time. The 3D model is calibrated annually by its designers Alan Standen and Michelle Sutherland with data collected by CUWCD.

The District has integrated the model with their online mapping system. This allows individual landowners to assess their groundwater resources at specific locations online through this publicly accessible tool. CUWCD’s board felt the model was an important investment as it not only increases transparency, but also assists the district in their mission to make fair and balanced decisions based on accurate data.

The 3-D model coupled with professional analysis by LBG-Guyton Associates has allowed CUWCD to quickly respond to localized issues. For example, in 2014 the District saw drawdown along a county line where a large amount of domestic wells were located. By analyzing localized drawdown the district was able to determine that rural domestic users needed to be informed by an education campaign that included enlisting the help of homeowners associations, CUWCD encouraged landowners to reduce water usage to protect the health of their wells. Over the three-year period since, there has been substantial recovery of artesian head.

The online mapping system is just one piece of CUWCD’s web-based data management system. The database also includes a network of over 50 monitor wells. The data collected from the monitor well network, coupled with their 3-D model provides the District with the best available science for managing to the Desired Future Condition (DFC), the 50 year planning horizon GCDs must adhere to when permitting groundwater.

The database not only allows landowners to view their groundwater resources, but also allows the public to view well locations, well drillers’ logs, water levels, water quality assessment, and well production. Public access to this information, coupled with the ability to view and create customized maps and layer in FEMA, NOAA and appraisal district maps means that CUWCD has earned the reputation of being an efficient repository of data.

CUWCD is currently conducting research projects on the karst aquifer systems in the northern segment of the Edwards BFZ Aquifer. The research includes utilizing dye trace studies, water quality analysis, spring flow gauges, and investigation of the recharge pathways of the system. For many of these research projects, the District has partnered with Baylor University and works with its graduate and postdoctoral students. Working with current researchers allows CUWCD to continue to make policy based on the best available science.

Baylor also assists the District with maintaining their US Fish and Wildlife Service advance research permit. In the midst of the 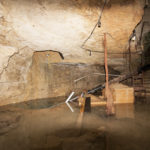 drought in the summer of 2001, the U.S. Fish and Wildlife Services notified CUWCD that a petition on behalf of the Salado Salamander as an endangered species was imminent. The District decided to form the Bell County Adaptive Management Coalition, composed of Bell County, Clearwater UWCD, Village of Salado, landowners, and water supply purveyors for Salado. The newly formed group decided to conduct research. During the course of the research, it was discovered that there were 5 spring orifices within 300 meters of one another that came together to form what the District calls a “spring complex.” Armed with the results of this research, the District confirmed their decision in 2011 to manage their groundwater resources by maintain spring flow, thus sustaining the salamander’s habitat and lifting the petition from being endangered to threatened status.

In addition to their collaborations with Baylor University and the Bell County Adaptive Management Coalition, the CUWCD also convenes a stakeholder group on DFC setting. Before the outset of the DFC process, CUWCD established the stakeholder group that includes public officials, water purveyors, well owners and their consultants as well as adjacent GCDs The objective of the group is to allow the various stakeholders to provide input on areas like production that would be affected by the DFC setting process. The group met 5 times during the two year DFC process, including before Groundwater Availability Model (GAM) runs were developed as well as after each GAM discussion was held at the Groundwater Management Area (GMA) level.