Plum Creek Conservation District in Lockhart is unique among GCDs. In addition to the district’s groundwater management responsibilities under Chapter 36 of the Texas Water Code, the district is also charged with flood control responsibilities under Chapter 51. When TAGD staff selected Plum Creek Conservation District (PCCD) for the April newsletter feature, I was so excited to receive an invitation to spend a morning with the PCCD staff at one of their flood control sites. Read on for some background information about this double-duty district, and photos from my adventure in the field. 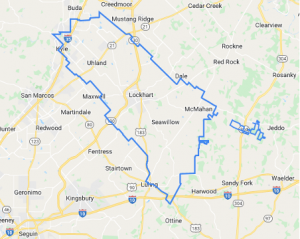 The district was established in 1957 for the purpose of flood control in the Plum Creek watershed in portions of Hays and Caldwell counties. In 1989, its enabling legislation was amended to add groundwater management responsibilities in that same area. Voters confirmed the addition of these Chapter 36 powers in 1993. Now, the district covers some additional non-contiguous land southeast of the main district boundaries due to an annexation snafu – in 2008 both PCCD and Gonzales County UWCD annexed portions of Caldwell County at the request of several landowners. To remedy the issue, legislation was passed in 2011 that required those landowners to choose a district and resulted in the district map you see today.

Plum Creek Conservation District encompasses an area of Central Texas just adjacent to the rapid growth of the I-35 corridor, with many of the towns still trying to preserve their rural roots and small-town charm as subdivisions pop up around them. The district covers about a quarter of Hays County, which was one of the fastest growing counties in the United States according to the last census. Caldwell County is not too far behind, with similarly high growth rates fueled by easy access on the SH-130 toll road and relatively low land prices when compared to urban areas. As a result of the expansion of these bedroom communities, most of the district’s groundwater use is for public water supply. The area also has quite a bit of oil and gas activity in the Luling area, including construction of a few injection wells for disposal.

PCCD tracks groundwater levels in 38 monitor wells throughout the district. Some of the wells have telemetry equipment to provide for continuous data monitoring, while others are measured manually once or twice a year. The district has also partnered with the neighboring Gonzales County UWCD and Guadalupe County GCDs on a monitoring project for which PCCD provides in-kind hydrogeological consulting. 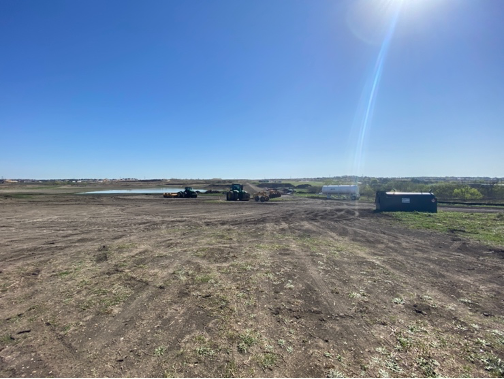 Staff of Plum Creek Conservation District spends about 70% of their time managing flood control sites throughout their service area. Each of these 28 earthen dams is strategically located throughout the Plum Creek watershed to collect runoff during rain events and release the water at an engineered rate to protect homes and businesses from flooding risks. The dams were constructed in the 1960s and 1970s and are funded by USDA-NRCS, Texas State Soil & Water Conservation Board, and PCCD. These partnerships allow the district to fund maintenance, operations, and renovation of flood control structures. Earthen dams have a lifespan of about 50 years, so many of the flood control structures have recently been renovated or are slated for rehabilitation in the near future.

After a tour of the district office in Lockhart, PCCD’s Executive Manager Daniel Meyer suggested we visit one of their sites that is currently being rehabilitated. I was given a hard hat and a bright orange safety vest for my foray into the world of dam construction! I met the PCCD staff at Site #10 just east of I-35 in Buda. The dam was built in the 1960s and is currently undergoing a $5 million renovation to replace components and reconstruct the dam. The site is adjacent to a large new residential subdivision, so there’s no doubt that a proper flood control structure will be essential in capturing runoff from the neighborhood’s impervious surfaces.

I was surprised by a few things upon my arrival – first, the magnitude of the site! On a map, flood control sites like this are tiny, oddly shaped blue dots throughout the state that you normally don’t think twice about. After we parked at the construction “camp” on the southwest side of the site, we walked about a quarter of a mile across the earthen dam to see the main construction area where workers were building a new principal spillway pipe, a 30-inch outlet that lets water flow from the reservoir to the spillway. The lake had been lowered to allow for this dam construction and replacement of the dam’s riser, but it can capture up to 840 acre-feet of water from its drainage area of over 1,100 acres. The dam itself will be nearly 40 feet high upon completion. 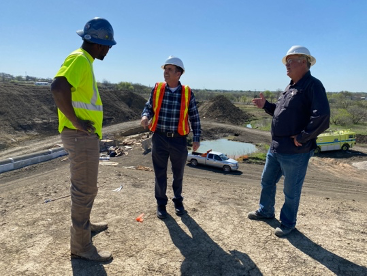 These dam projects have a lot of oversight to make sure that everything goes right. I met the USDA-NRCS inspector assigned to the project, who is required to be onsite at all times during construction. A private construction company completes the work under technical guidance from the inspector and flood control engineers at NRCS. Once the dam is finished, it will be inspected by NRCS annually and undergo an inspection by TCEQ every five years.

The flood control sites have easements mostly on privately-owned land, sometimes with multiple landowners. The PCCD staff must maintain positive working relationships with the landowners and inform them when they need to access the sites for maintenance or any other purpose. This skill undoubtedly is useful in working with groundwater permittees, as well.As I chatted with PCCD’s field technicians, Alan Burklund and Matt Shaw, I learned that the hard work doesn’t end when construction is finished. In addition to their typical GCD field staff duties like measuring water levels, Matt and Alan are also in charge of maintaining the 28 flood control sites and the land around them. This includes regular inspections of the dam structures, managing vegetation, erosion control, fence repair… and it wouldn’t truly be field work if there weren’t a few wildlife stories. The team has had their fair share of rattlesnake sightings and even has a stubborn beaver problem at one of their sites in Caldwell County! 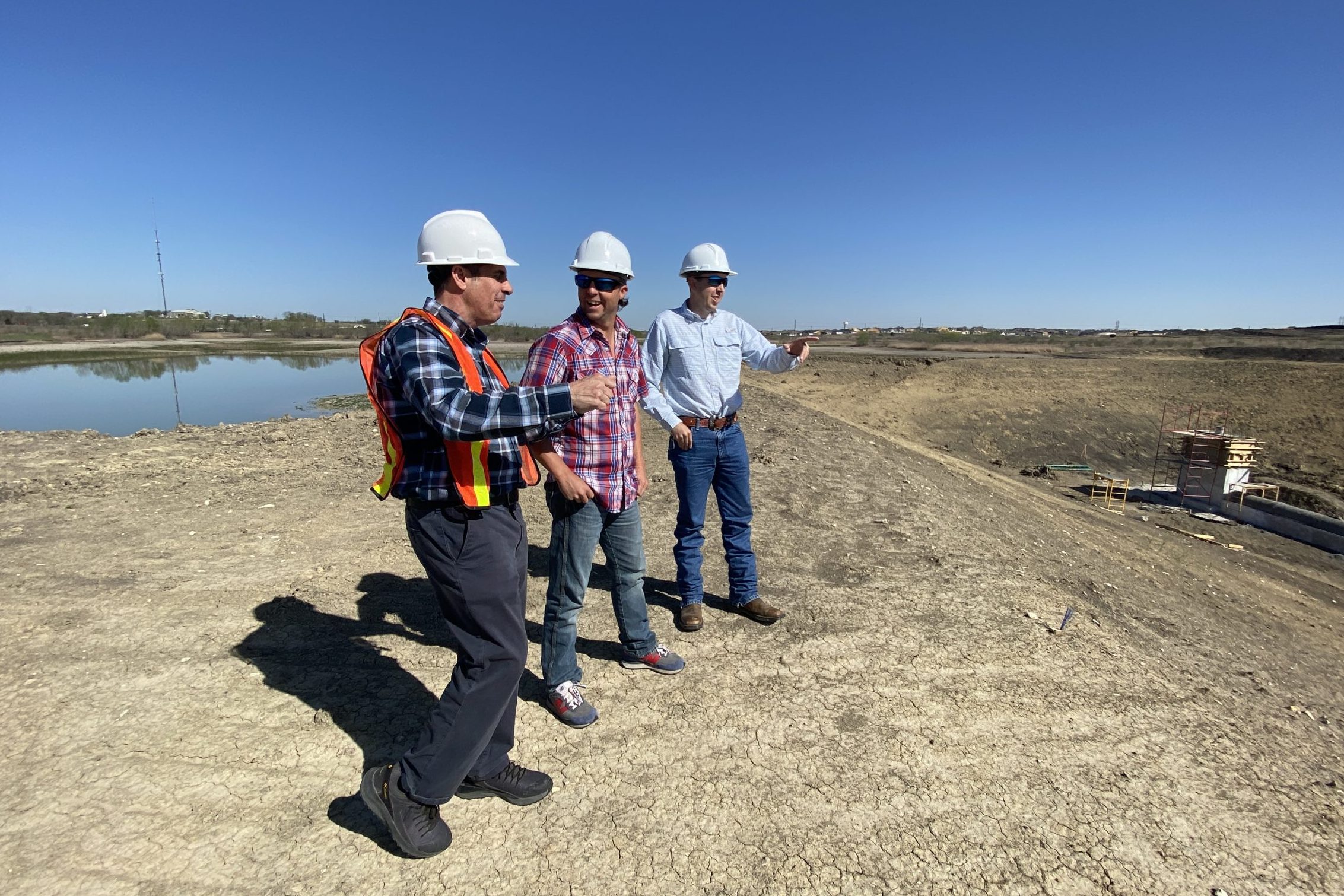 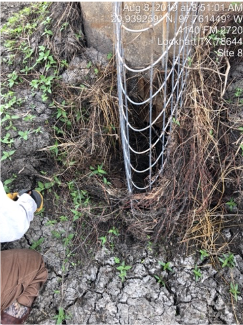 PCCD staff had to build a structure around one of the water ports at a dam to prevent beavers from blocking the flow with mud.

Residents within Plum Creek Conservation District are lucky to have a devoted district looking out for their water interests – below ground, and above ground! To learn more about PCCD, visit www.pccd.org.