The Texas Alliance of Groundwater Districts (TAGD) was created in 1988 when a group of 14 groundwater conservation districts (GCDs) joined together with the objective of creating an organization that would serve as a resource to both GCDs and the public on groundwater issues. 30 years later, TAGD now represents 90 GCDs and 40 associate members. Since its creation, TAGD has been led by dedicated officers that represent district members and carry out important duties of the organization. Last month the 2021-2023 TAGD Executive Committee took office to usher in a new chapter of the organization’s story. Learn about TAGD’s history and look to the future under the new Executive Committee’s leadership…. 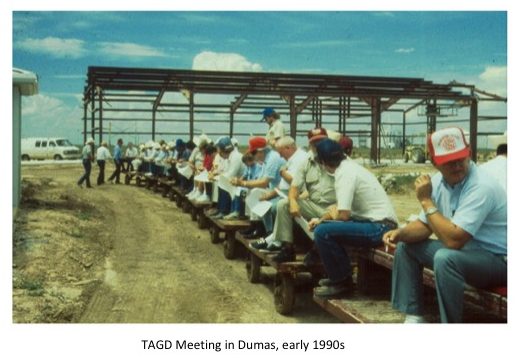 Pursuant to TAGD’s Bylaws, the organization is led by the Executive Committee. This committee includes the elected offices of president, vice president, treasurer, secretary, and parliamentarian, plus the immediate past-president and a caucus representative from each TAGD area not otherwise represented. The TAGD Executive Committee for fiscal years 2022 and 2023 is made up of:

The TAGD family is ever-changing, and we thought the change in TAGD leadership presented a great opportunity to introduce the Executive Committee members! 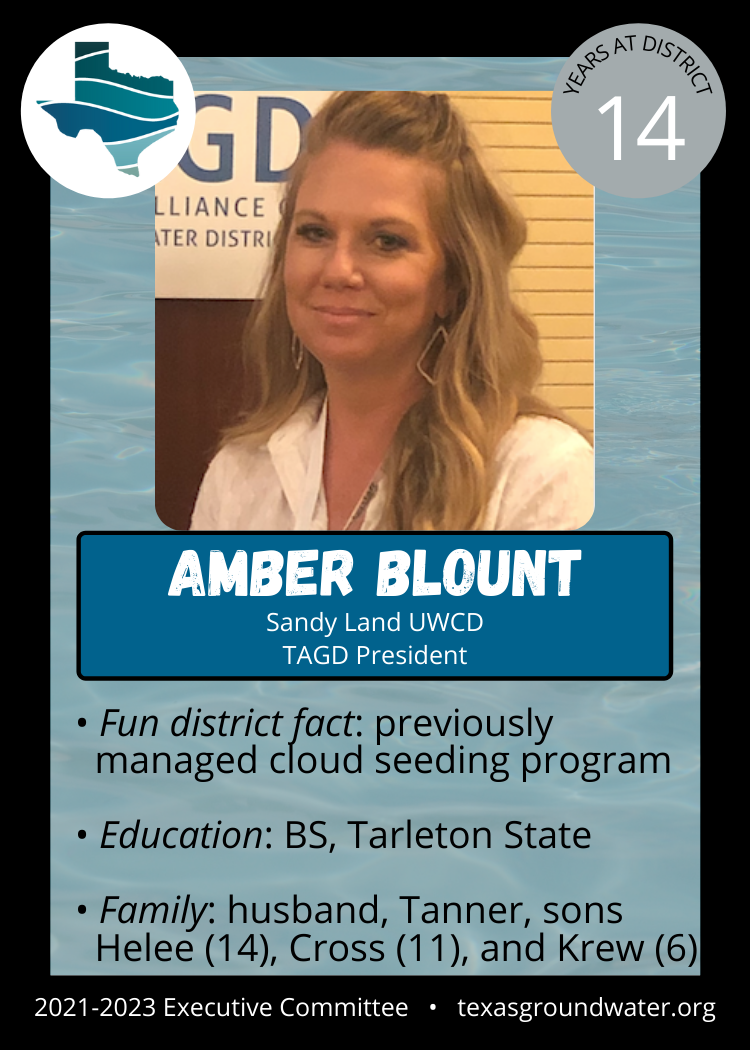 President Amber Blount leads the organization now after serving two terms as vice president, where she was responsible for chairing the Legislative Committee and serving on the Finance & Budget Committee. In addition to this organizational experience, she has been the General Manager at Sandy Land UWCD in Yoakum County for the last six years and served for eight years prior in administrative and educational roles at the district. When Amber is not managing groundwater resources for Sandy Land’s primarily agricultural water users, she can be found wrangling her three sons (ages 14, 11, and 6) and all of their animals with her rancher husband, Tanner. The travel destination at the top of her bucket list is Positano, Italy to recreate the trip from the 1994 romantic comedy Only You.

Amber recently took the reins from Zach Holland, who now holds a spot on the TAGD Executive Committee as the past president. Zach grew up watching his father, Scott Holland, manage Irion County WCD and wanted to be just like him when he grew up. Zach is living that childhood dream right now – he was elected to be TAGD’s president exactly 20 years after Scott served in that same role, and he is the General Manager of Bluebonnet GCD. In this position he works with 16 appointed board members (the largest appointed GCD board in the state!) to manage groundwater in Austin, Waller, Grimes, and Walker counties. 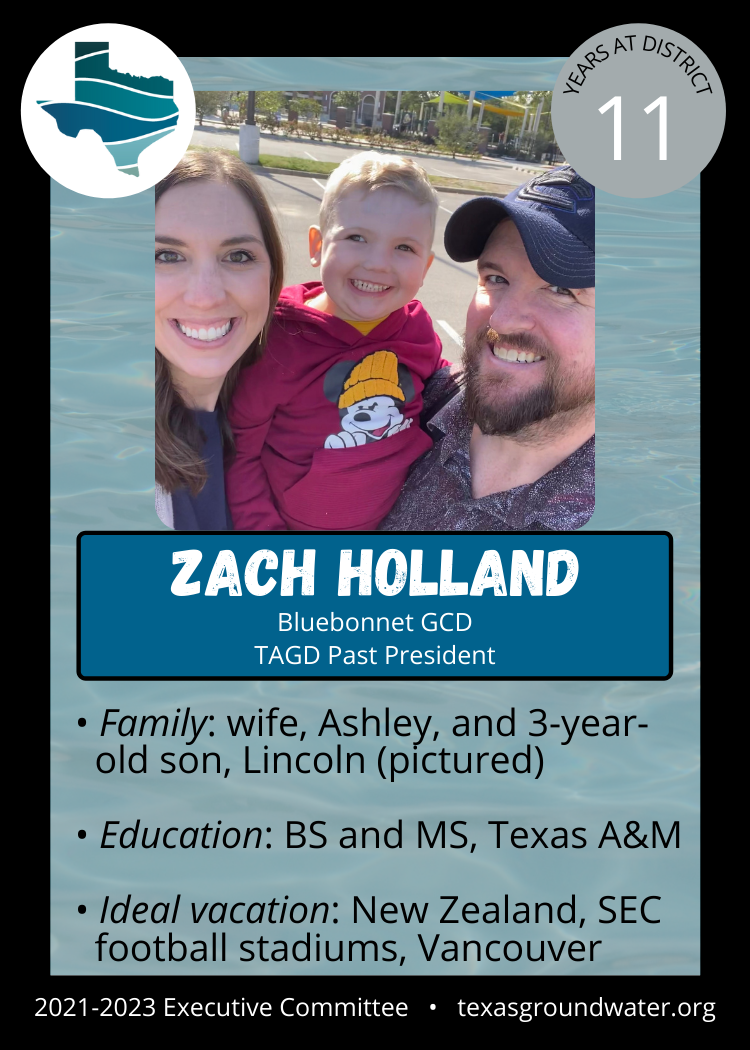 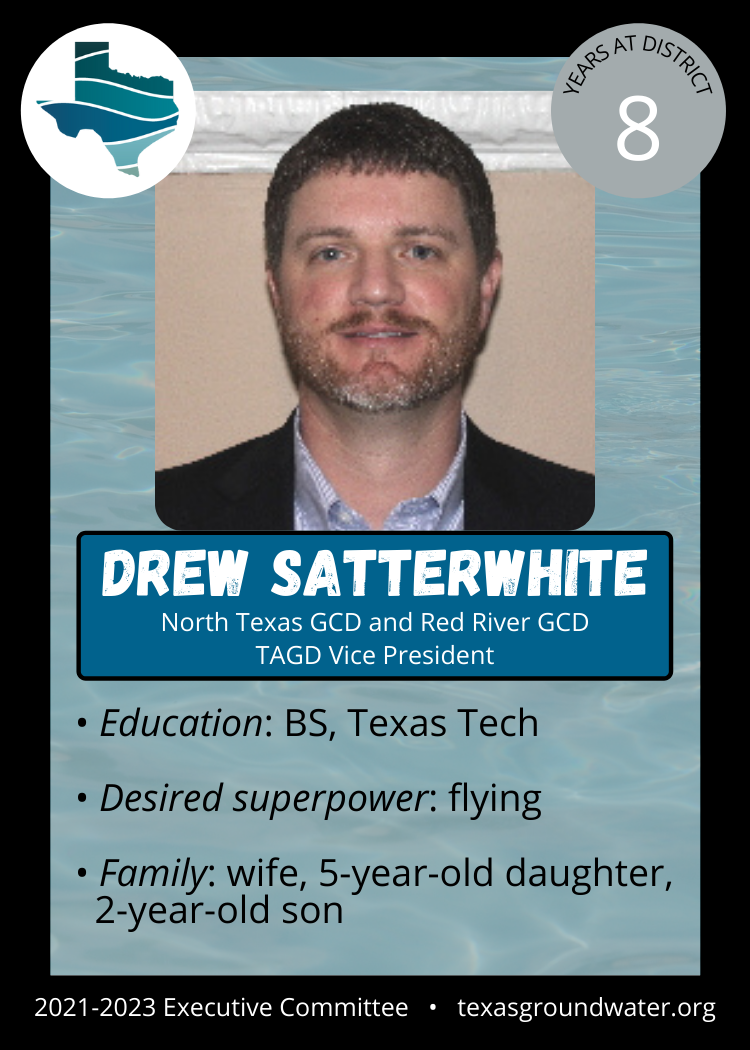 Vice President Drew Satterwhite also has family ties to the world of Texas water. Drew was inspired to pursue a career in the water industry after seeing his father, Kent Satterwhite, serve as the manager of Canadian River Municipal Water Authority. Drew studied civil engineering at Texas Tech University and worked at North Texas Municipal Water District for several years before becoming the General Manager of Red River GCD and North Texas GCD. This is Drew’s first term on the Executive Committee and he looks forward to getting to know other groundwater professionals throughout the state and helping members learn from each other. 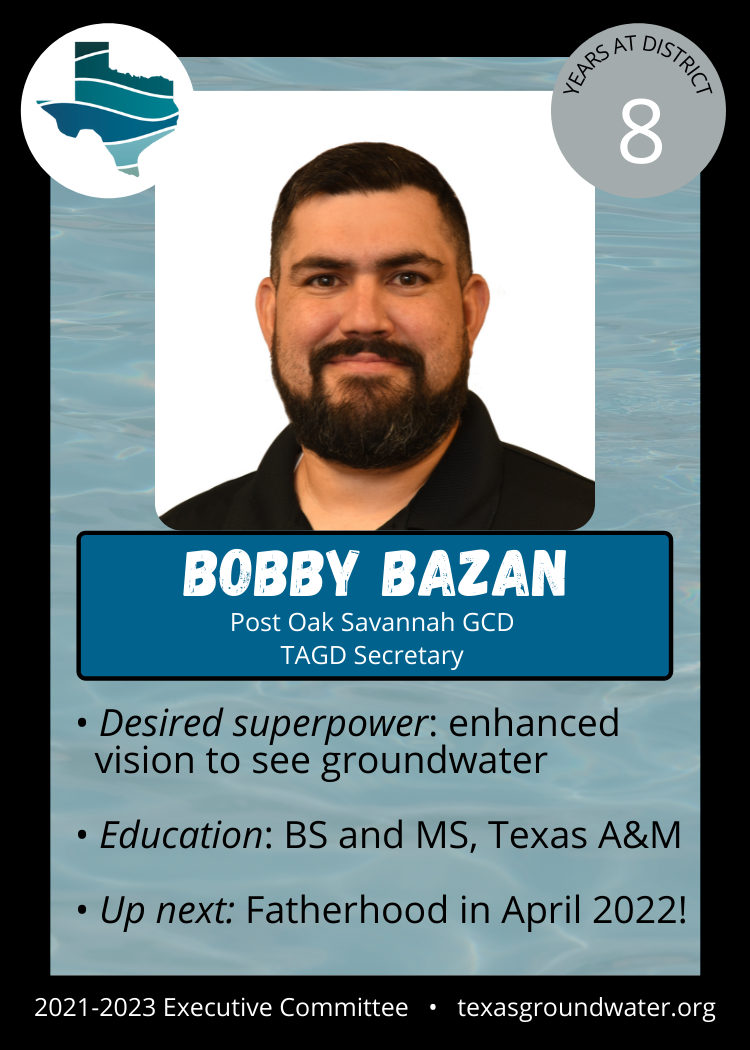 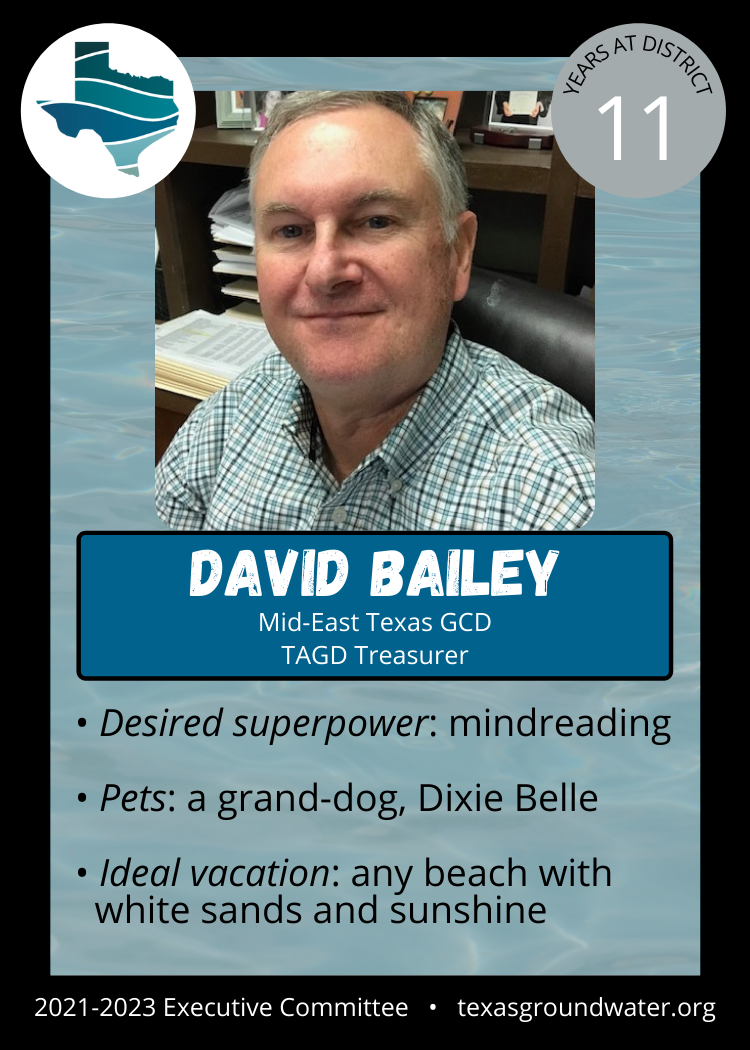 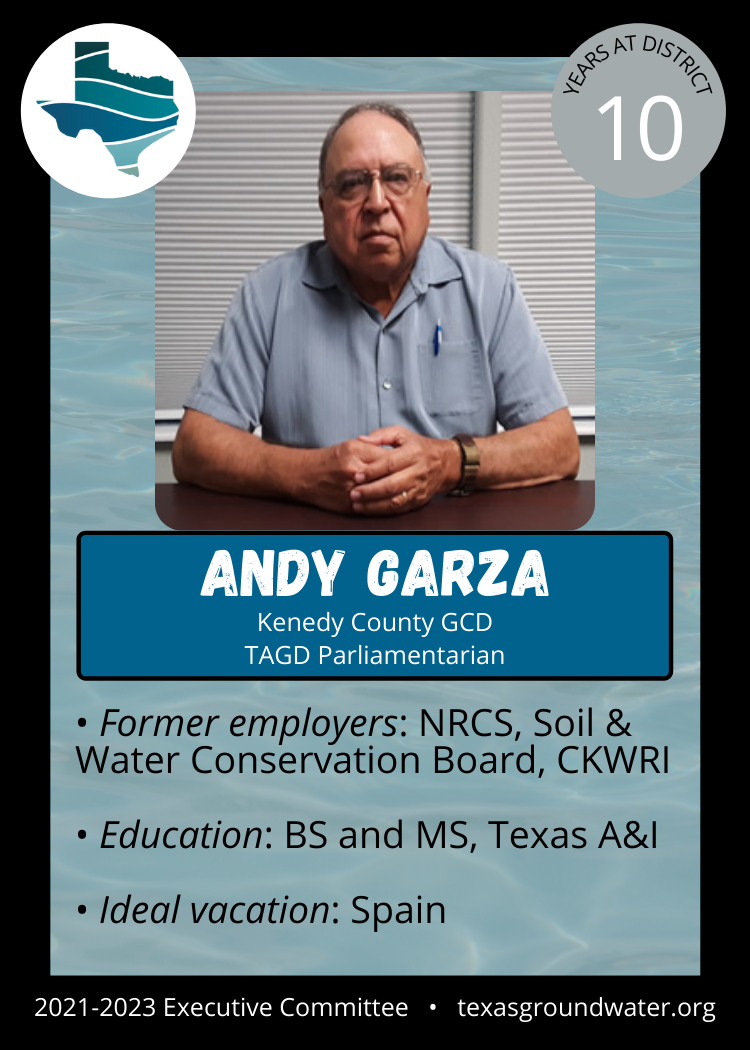 Bobby Bazan is another TAGD officer that is new to the Executive Committee. While Bobby wanted to be the President of the United States or Governor of Texas when he was younger, we hope he’ll find satisfaction as TAGD’s secretary. In this role, he looks forward to working with the Information & Education Committee and being more informed on groundwater issues throughout the state. In addition to these tasks and his everyday duties at Post Oak Savannah GCD, Bobby will have even more to look forward to in the spring – he and his wife Vanessa are expecting their first child in April!

TAGD’s treasurer, David Bailey, helps us stay financially on track as we carry out our operations and member services. David is well-suited for this position, which he also held for FY20 and FY21 – he holds a bachelor’s degree in finance from Sam Houston State University and he worked in various capacities for two county appraisal districts before becoming the General Manager of Mid-East Texas GCD in 2009. His district covers Madison, Leon, and Freestone counties in East Texas. One curious fact is that his district contains a large mushroom farm and one of the state’s largest peach orchards.

Andy Garza serves TAGD as the organization’s parliamentarian. For the last ten years he has managed Kenedy County GCD in South Texas. Although it bears a single-county name, the district actually covers Kenedy County and parts of six other surrounding counties, the bulk of which is made up of several large ranches. When asked what superpower he would choose if he could, Andy responded that it would be the ability to make people from all walks of life to get along – something we think he’s pretty good at in his role as chair of the TAGD Bylaws Committee! 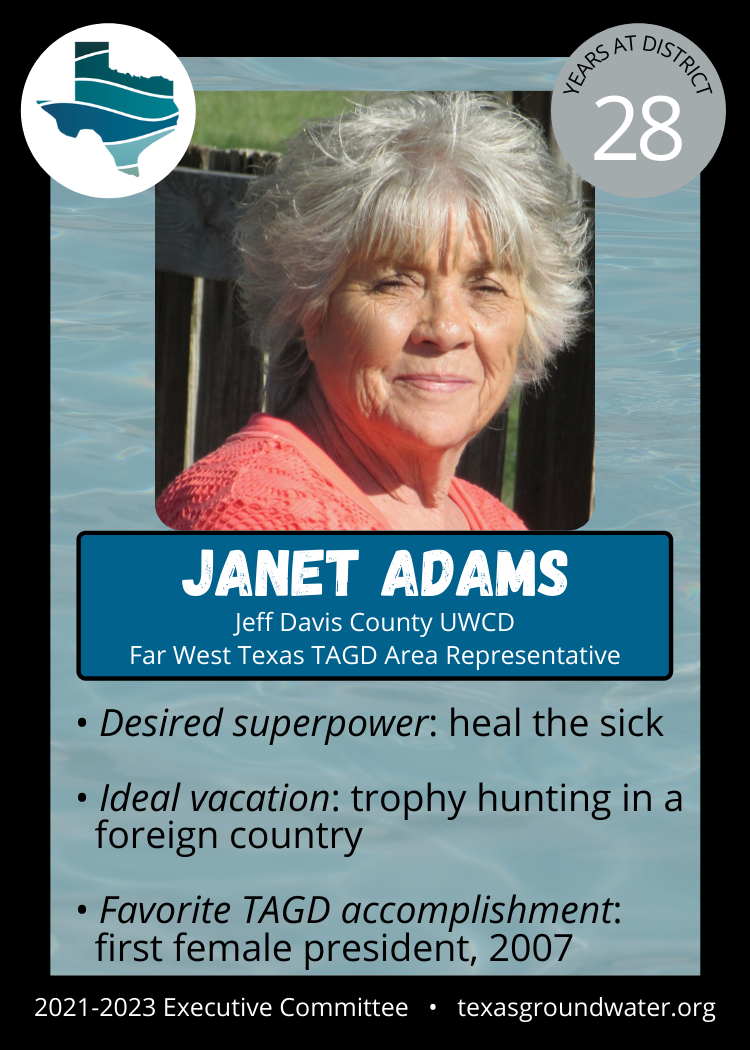 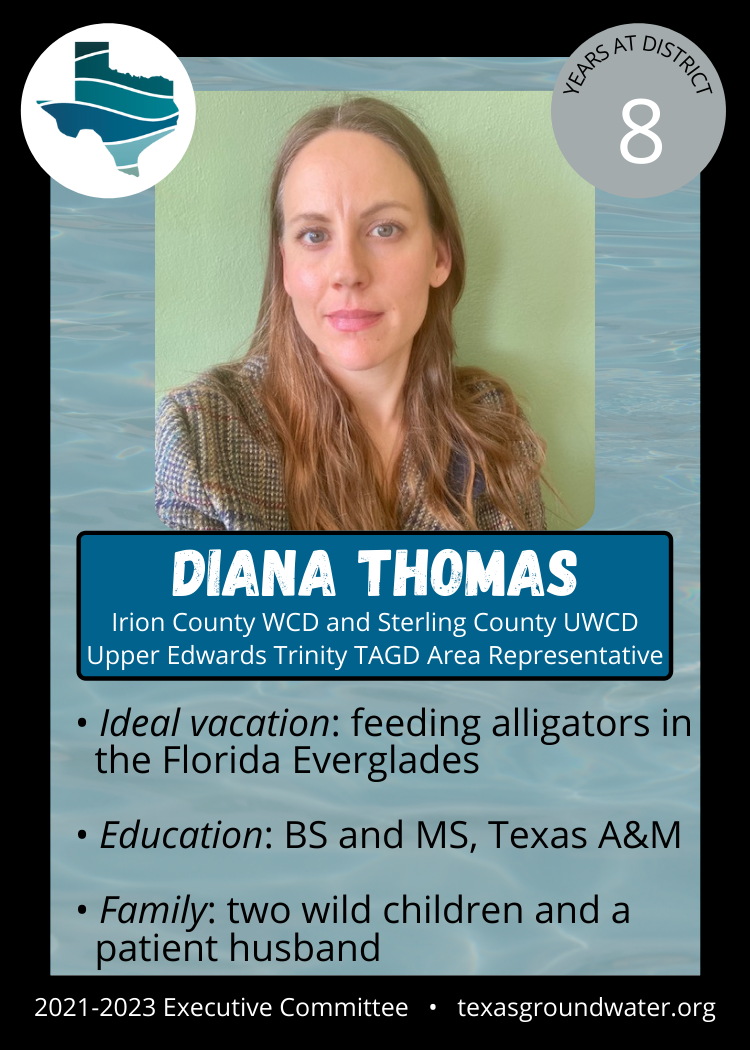 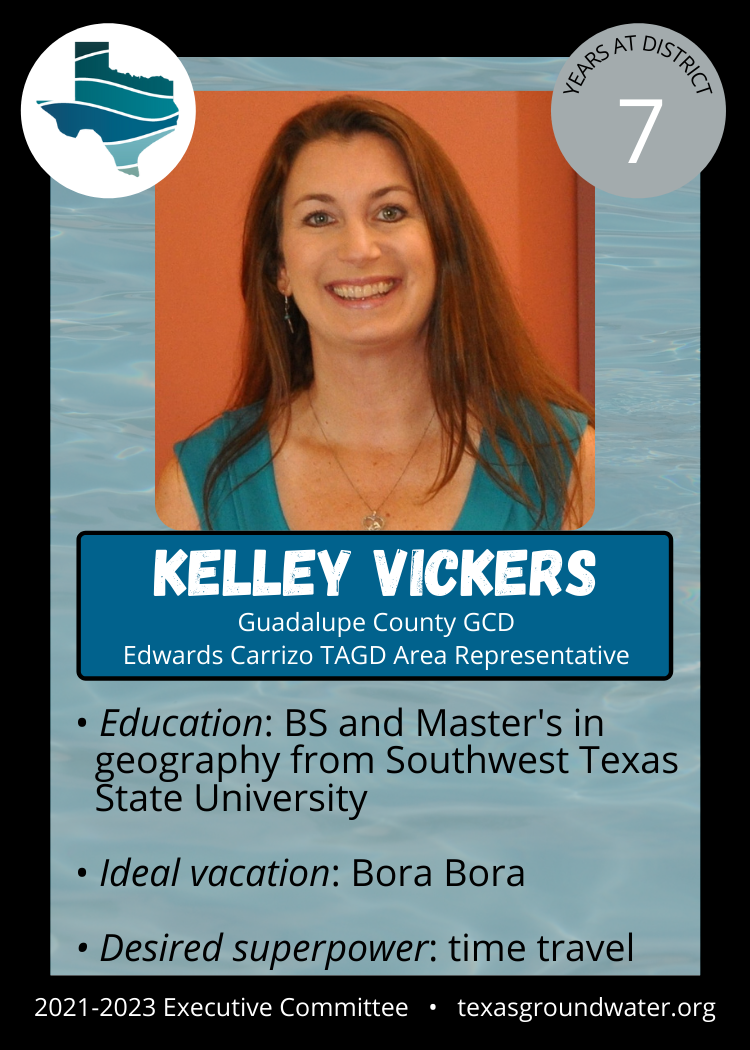 Janet Adams represents the interests of eight member districts in the Far West Texas TAGD Area on the Executive Committee. Janet has been a steady presence in TAGD leadership and is proud of her long history on the Executive Committee as an area representative, secretary, and as TAGD’s first female president in 2007. She manages Jeff Davis County UWCD in rural West Texas, where her district contains as many square miles as it does people!

Serving her second term on the Executive Committee, Diana Thomas represents the Upper Edwards Trinity TAGD Area. When she was a child, she wanted to be an astronaut. While she doesn’t get to drive rockets or float around in space, she still gets to “explore the unknown” at Irion County WCD and Sterling County UWCD  by doing laboratory analysis of water samples and seeing beautiful areas of the countryside that not many have the chance to visit.

Kelley Vickers is a new member of the Executive Committee and is excited to work with the TAGD family in her role as Edwards Carrizo TAGD Area Representative. She holds bachelor’s and master’s degrees in resource and environmental studies from Southwest Texas State University and served Guadalupe County GCD as the Executive Administrator before becoming the General Manager in 2018.

Ron Fieseler is the Lower Edwards Trinity Area Representative on the TAGD Executive Committee, a post he has held several times. He manages Blanco-Pedernales GCD.

Thanks to the FY22-23 Executive Committee for their commitment to the organization! With these amazing leaders at the helm, TAGD has a bright future. We encourage all TAGD members to get to know the officers and your TAGD area representative. By keeping open lines of communication and actively participating in TAGD, you can help make the organization the best it can be. Not sure what TAGD area you’re in? Click here to view the TAGD areas and connect with your area representative.