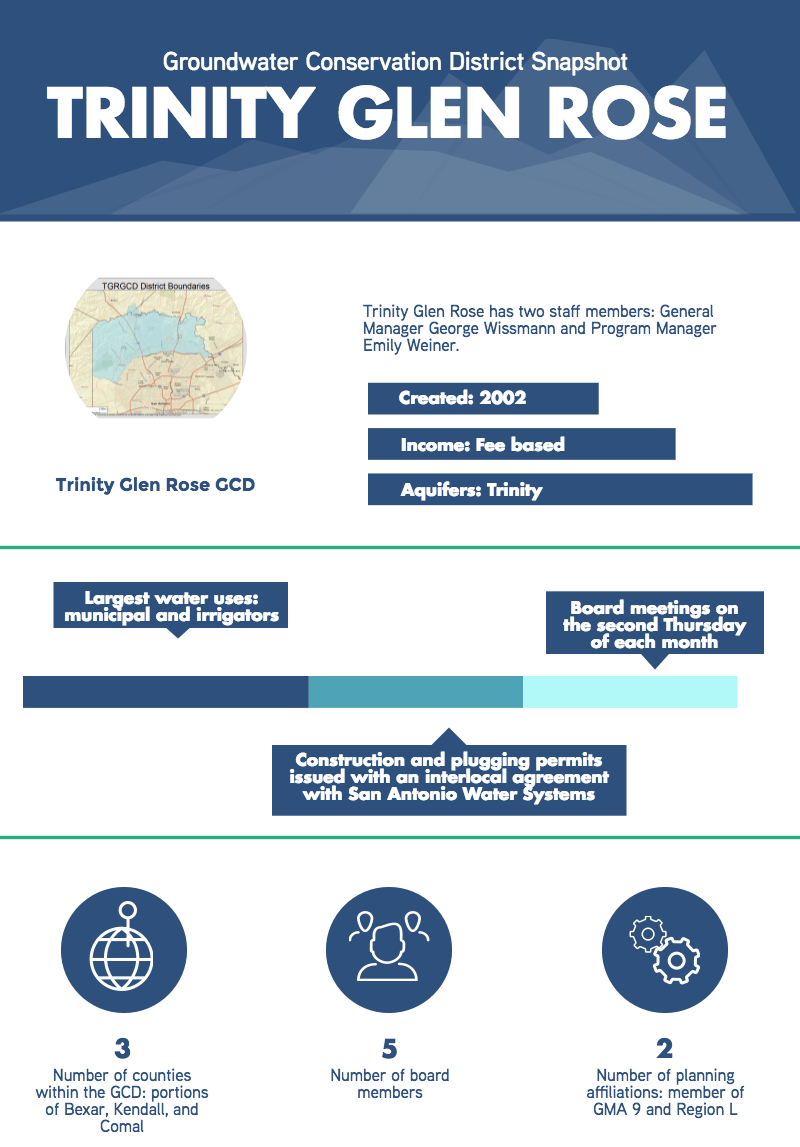 Trinity Glen Rose has an interlocal agreement with San Antonio Water System (SAWS) to process well construction and plugging permits as well as inspect wells. The permitting agreement allows for Trinity Glen Rose to utilize the efficient system that SAWS already has in place, minimizing the duplication of work. Records and data management are handled by district staff and maintained in a database of permitted wells for use in GIS applications.

There are hundreds of wells drilled into the Trinity Glen Rose formations throughout the 200,000 acres in the Trinity Glen Rose GCD. Of these wells, seven wells are monitored on a regular basis. As a part of their outreach efforts, the District has created an interactive map that can be viewed online and offers users detailed information relating to the state well number, period of record, aquifer, and water level readings. The map can be viewed here.

Conservation Outreach has an important place in the work that Trinity Glen Rose GCD performs. The District sponsors numerous rain barrel workshops throughout the year, conducts free in-home water use audits ,and staffs informational booths at community events. The District has recently expanded its efforts to include a monthly newsletter that aims to highlight conservation efforts within the District, and contracting with a communications consultant to increase awareness and educate the public on the Trinity group of aquifers.

Trinity Glen Rose has been running it’s in-home water use audit program for several years now. The program is free to residents and businesses located within the District. The District staff start by inspecting common areas in which water is typically lost–faucets, water heaters, washing machines, irrigation systems, and the like. Staff then move on to discuss with local homer owners current irrigation schedules, choice of landscaping plants, the presence or absence of raised beds, and the benefits of drip irrigation. The District follows up with a letter outlining the recommendations to reduce water consumption; something as simple as fixing a leaky faucet can save over 500 gallons of water per year. Each homeowner also receives a “goody” bag that includes water conservation literature, a hose timer, travel mug, water bottle, faucet aerator, rain gauge, and a moisture meter. District staff enjoy the in-home water use audits as they provide an opportunity to discuss groundwater management with the public in an informal setting.

Since April 2014, Trinity Glen Rose GCD has assisted 252 community residents to construct their own rainwater harvesting barrels through the District’s build-a-rain-barrel workshops. Rainwater harvesting is a technique used for collecting and storing water for later use. The District’s program involves the use of barrels for collecting water; the workshop participants pay $25/barrel and Trinity Glen Rose subsidizes the rest the of the cost. Trinity Glen Rose also makes use of the event to host an informational booth where they can educate the public on GCD issues including water conservation, monitor wells, the Trinity Aquifer, and using native plants in landscaping. Initially, Trinity Glen Rose worked with the local Texas A&M AgriLife Extension to host the workshop, but now hosts these workshops on their own.

Find the latest Trinity Glen Rose news and events by visiting their website.