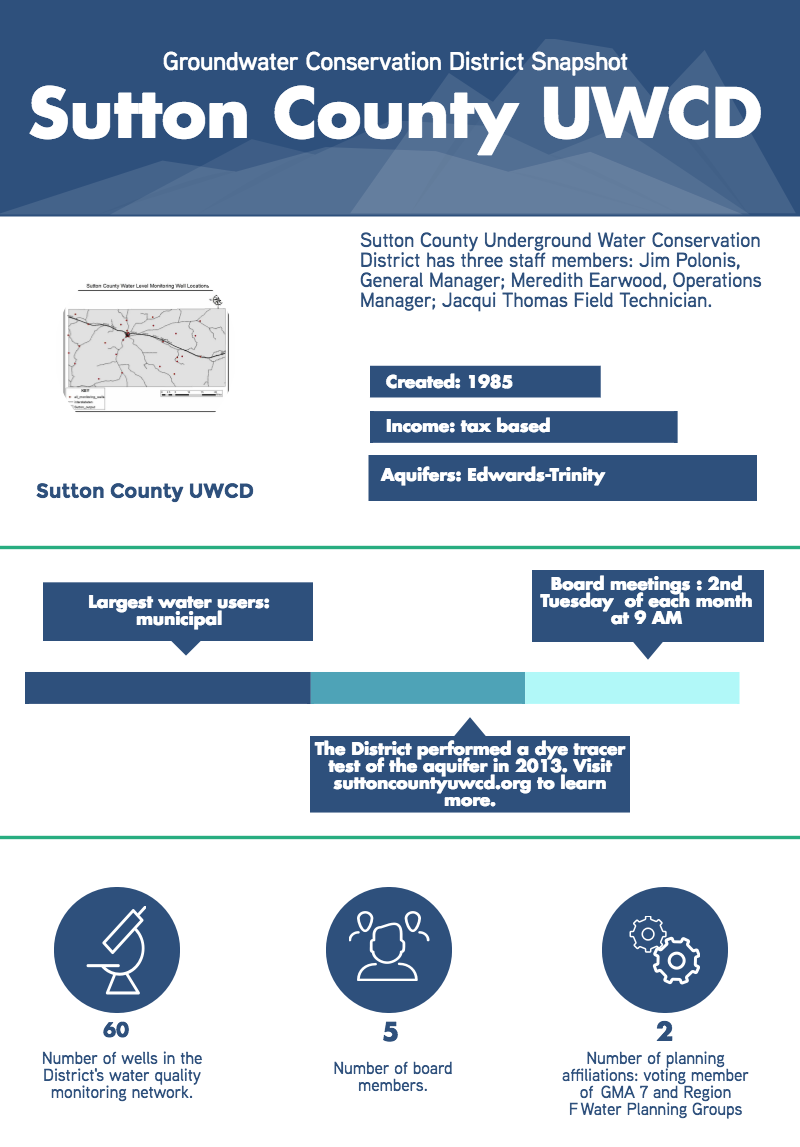 Groundwater Conservation Districts (GCDs) are charged with protecting the groundwater resources within their district. With that in mind, Sutton County Underground Water Conservation District (SCUWCD) performed a dye tracer test in 2013 with the aim of deepening their knowledge of local aquifer conditions. It was the District’s hope that the dye tracer test would increase the information they had on the direction of water inflows and outflows; storage capacity; and the transmissivity (or rate of flow) of the aquifer. SCUWCD contracted with hydrogeologists at Southwest Research Institute to advise them during the test. SCUWCD staff planned and performed the test and partnered with the Edwards Aquifer Authority to analyze the results. The results brought to light some significant information, including a surprisingly fast rate of transmissivity. A detailed look into the first dye tracer test can be viewed here.

The District is in the planning stages of a second dye tracer test, which will build on conclusions from the first, and deepen their understanding of the aquifer’s attributes. In addition to the dye tracer tests, the District collects monthly data on water levels in the aquifer. This information is mapped and modelled, establishing a piezometric surface, which is a visualization of the aquifer’s water levels across the District. The District also has an inventory of 60 water quality wells that are divided into three groups of 20, which are sampled on a three-year rotational basis. This effort is yielding some interesting data on the water chemistry of the aquifer, and contributes to a better understanding of its dynamics.

Following her internship, and at the encouragement of several GCD general managers she met while interning, Meredith applied to the master’s program at Texas A&M. She gained hands on experience by working with the Post Oak Savannah GCD while earning her master’s, but always knew she wanted to return home to Sonora. Meredith is representative of the new generation of staff with strong technical and policy backgrounds populating rural GCD offices. In October of this year, recent graduate from Texas A&M University’s Water Management and Hydrological Science graduate program, Meredith Earwood, joined the District as Operations Manager. As a sixth generation rancher whosefather and grandfather were a part of the Soil and Water Conservation Board, Meredith was raised with an awareness of water conservation issues and technologies that can assist landowners in conservation practices. She developed a keen interest in groundwater issues while interning for Representative Four Price during Texas’ 83rd legislative session, where she was responsible for tracking water related legislation.

The District has been and continues to be involved in several collaborative efforts in the areas of data collection and education. SCUWCD collaborates with the Sutton County AgriLife Extension office to put on day-long water education events for 4th and 6th grade students in the county and partners with the city on educational events around water conservation and protection of water quality.

SCUWCD is over a karst aquifer system with high water flow rates, so contamination is a major concern. With that in mind, the District offers free macro analysis testing to well owners in its area. In an effort to monitor and maintain District wide water quality data, SCUWCD performs annual water quality testing, as well as testing of an individual landowner’s well if a suspected contamination event is reported.

SCUWCD has a robust website that not only includes information on the District’s rules and meetings, but also provides information on a variety of topics ranging from drought, to karst formations, and the Desired Future Conditions process. For more info, visit suttoncountyuwcd.org.