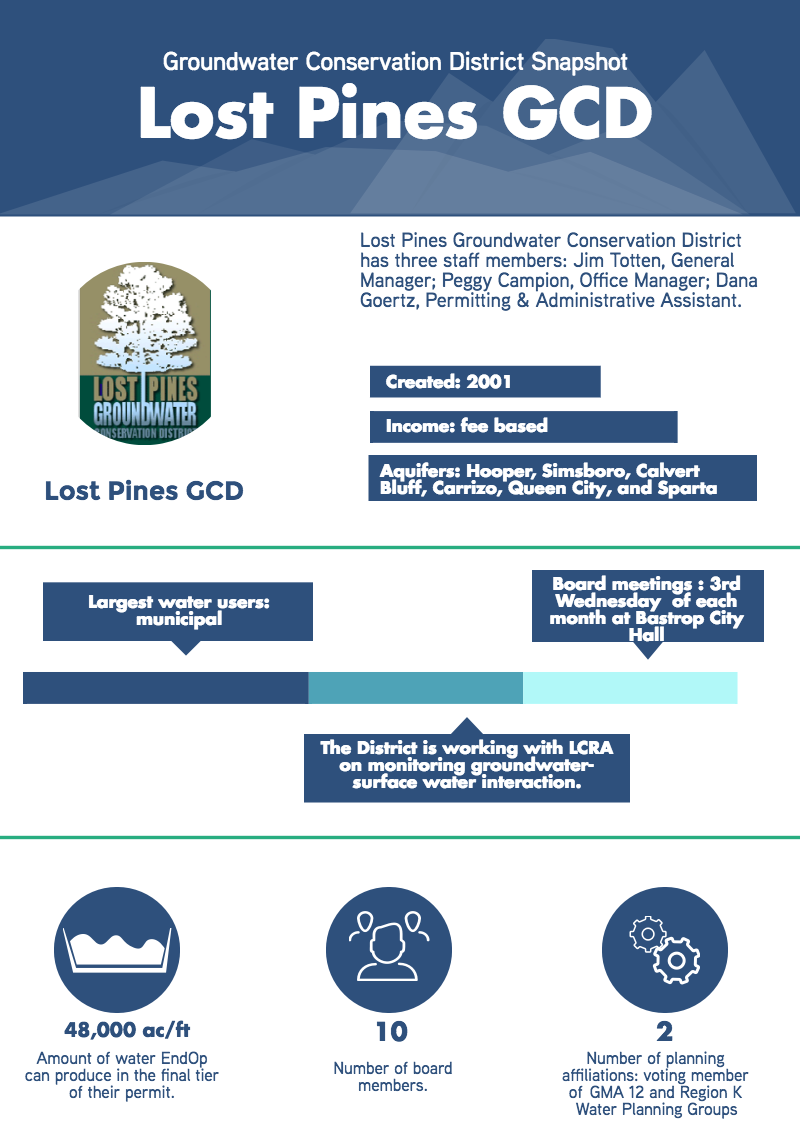 In 2014, the District and US Geological Survey (USGS), in cooperation with Llano Estacado UWCD and South Plains UWCD, began a multi-phase project to developa regional conceptual model of the hydrogeologic framework and geochemistry of the Ogallala, Edwards-Trinity and Dockum Aquifers. Sandy Land Underground Water Conservation District (SLUWCD) first became involved with the project after listening to a presentation at a Texas Alliance of Groundwater Districts meeting on a similar study the USGS undertook in the Pecos Valley region. Then District General Manager Gary Walker presented the project to the SLUWCD Board who approved the partnership with funding from SLUWCD’s reserve funds. The District expects the study to provide additional detailed information on aquifer conditions, like saturated thickness, aquifer properties, and water quality which will yield a detailed conceptual model of groundwater flow paths and recharge throughout the county and in turn better inform the management of the aquifer.

The first phase of this project, which was recently completed, evaluated groundwater-level-altitudes and water quality data from Gaines, Terry, and Yoakum Counties. The second phase of the project has a focus on water quality testing and is slated to end in early 2019. Initial results from the Terry County study have produced good news: the results show that only trace amounts of agricultural chemicals have made their way into the groundwater. South Plains UWCD is the most recent district to join the project, coming on board for the water quality testing phase. South Plains General Manager Lindy Harris believes the study will benefit the three counties the districts serve by providing them with more detailed water quality data, as well as adding another layer of information to the Desired Future Conditions process in Groundwater Management Area 2.

Since 1992, and in partnership with the Texas Water Development Board (TWDB), SLUWCD has provided loans to agricultural producers in their district through TWDB’s Agricultural Water Conservation Loan Program. How does the program work? The District first takes a low interest loan from TWDB and in turn loans those funds to agricultural producers in their area who have a water conservation system or device they would like to purchase. As a part of the program, the District reports water savings to TWDB on an annual basis. SLUWCD’s Office Manager Gale McDonnel is in charge of tracking payments and making sure producers have up-to-date insurance on these capital investments throughout the life of the 7-year loan. Since the program’s inception, SLUWCD has made loans available for 393 new and used water conserving irrigation systems, for a total of over $11 million to Yoakum County producers. According to TWDB, the program has provided over $79 million in loans for water conservation programs and projects across the state over the last 30 years.

In addition to their collaboration with USGS, South Plains and Llano Estacado UWCD on the aquifer study project, the District has partnered with neighboring districts in2007 to create the Southern Ogallala Conservation & Outreach Program (SOCOP). The three districts equally share the costs to employ an education and public relation coordinator to carry out the program’s mission to “Educate communities today to save water tomorrow”. Each of the three districts share similar aquifer conditions, enabling key messages to be conveyed uniformly across the region, helping to clarify groundwater issues for all constituents.

Currently, the District has 90 participants and approximately 92,000 acres of land enrolled in its Depletion Program. Each year, district hydrologists, Ray and Amy of RMBJ Geo, use well depth data to construct hydrographs and depletion maps, which are used to determine the amount of decline allowable on federal income tax returns for landowners in Yoakum County. The District also has an extensive water quality program which annually tests a network of wells. The program has been in place since 1990 and has provided water quality testing to the residents of Yoakum County at no charge for the past 25 years.

With the recent decrease in oil and gas prices the county has seen a decrease in tax evaluations, significantly impacting the tax revenues collected by the District. Because of this, SLUWCD had to seriously consider their participation in Phase II of the USGS aquifer study. In the end, the District’s Board felt the study will be of enough beneficial use to the constituents of the District to continue to fund and collaborate with USGS on the project.