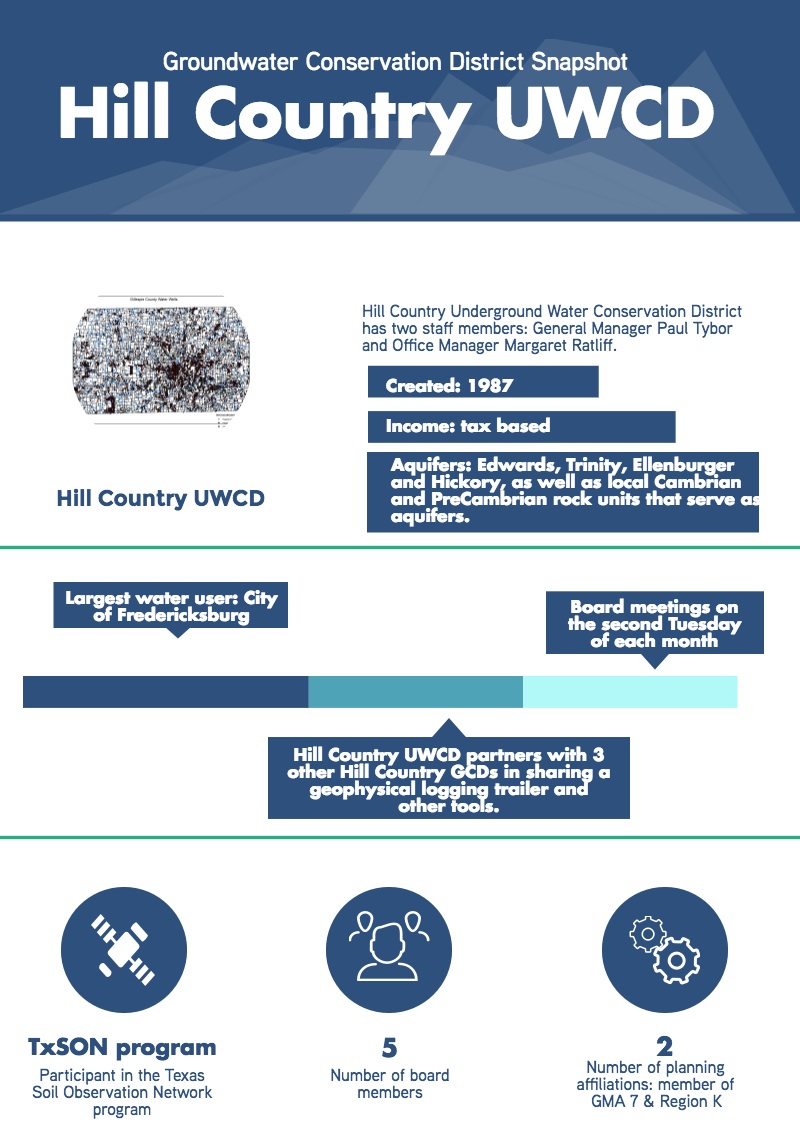 Four years ago, Hill Country UWCD partnered with Bandera County River Authority and Groundwater District, Blanco-Pedernales GCD, and Central Texas GCD to purchase a geophysical logging unit. The districts developed an interlocal agreement that defines the cost sharing and cooperative use of the unit. The logging unit is used to log wells in each of the districts and the districts share the data with each other. Data obtained from the unit generates geophysical logs that help visualize the hydrology and geology of the study areas. Through the use of the logging trailer, Hill Country UWCD now has a more robust understanding of the formations and layers within the Ellenburger Aquifer, which they hope will translate into better management of the resource. These same Hill Country districts also partnered on purchasing a downhole camera, which they use to help identify underground conditions or to record and document activities within a well. It can be rotated 360 degrees to help diagnose well problems.

In addition to geophysical logging and use of a downhole camera, Hill Country UWCD maintains a database containing drillers’ logs, water level data and any water quality data collected. HCUWCD has 8500 wells in their database. Out of the 8500 wells, only about 500 are permitted. The remaining wells are for domestic or livestock use.

In 2013, the Bureau of Economic Geology partnered with NASA to develop the Texas Soil Observation Network (TxSON) project. The project is part of a network of soil moisture sites around the globe. Hill Country UWCD’s General Manager Paul Tybor was introduced to the project through his membership in an informal group of hydrogeologists located in the Hill Country. HCUWCD helped select suitable sites for the soil moisture readers and facilitated communication with the landowners of those sites. A total of 40 soil moisture measuring sites have been installed in Gillespie County, which have helped calibrate the satellite being used in the project. The soil moisture sites in Hill Country UWCD’s service area are the only sites currently being monitored in Texas. Online tools allow district staff and the general public to access real-time soil moisture data within the last 30 days- www.hcuwcd.org/TxSon.htm. The district hopes to eventually obtain enough data to compare and contrast the effect soil moisture has on recharge rates. The TxSON project is a part of the larger Soil Moisture Active Passive (SMAP) program, a global collaboration that the district is particularly proud to be a part of.

HCUWCD provides free bentonite chips to landowners so they can plug abandoned wells. If the well site has less than 100 feet of water in it and
all other state requirements are met, landowners can plug their own well. The district receives on average 50 well plugging requests a year and budgets $1500 for the purchase for the bentonite.

In addition to protecting groundwater quality by plugging abandoned wells, Hill Country UWCD tests water quality for residents in their district with the in-house lab. Staff members conduct bacteria tests to determine if traces of coliform or E. Coli are present. They also test the chemical constituents of the water, including sulfates, chlorides, nitrates, fluorides and iron. Since the lab was built in the early 90’s, Hill Country UWCD has tested thousands of water quality samples.

The district works with the City of Fredericksburg, Texas A&M AgriLife Extension Service, and Texas Farm Bureau on educational outreach efforts at local school districts. They also interact with civic organizations throughout the area. In November, Hill Country UWCD’s general manager will be teaching a course at the Hill Country University Center in Fredericksburg relating to geology and hydrology of aquifers in Gillespie County.

Population growth is soaring in the Hill Country. Opportunities and challenges arise when planning and managing for increased future water demand. Understanding the complexity of aquifers in this area, as well as monitoring conditions, is critical for water supply sustainability.