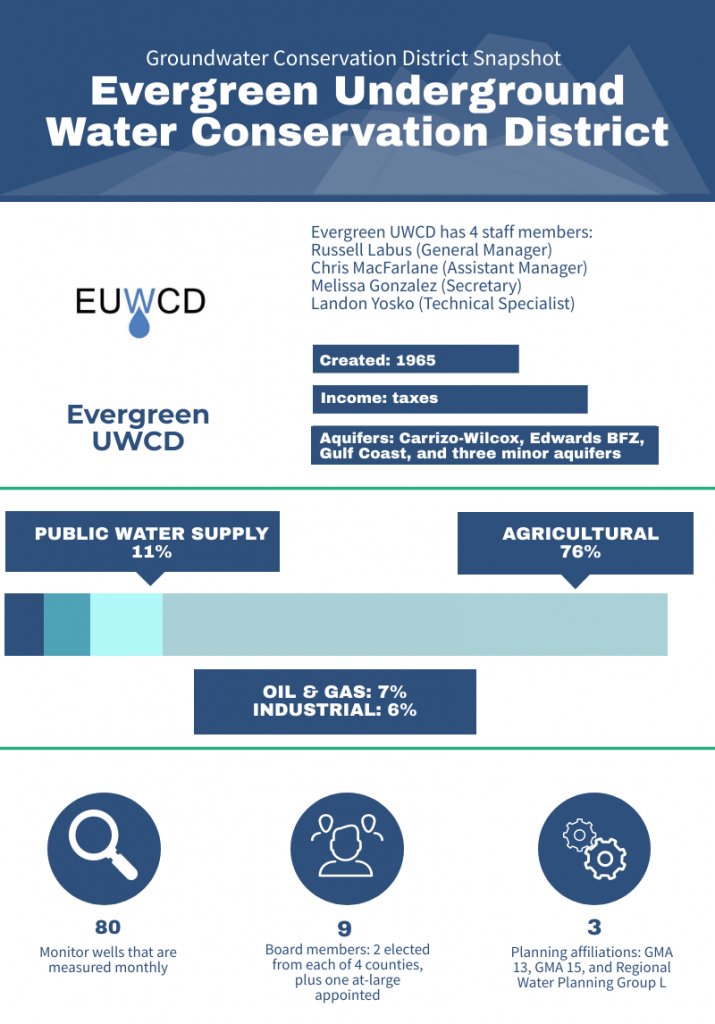 Evergreen Underground Water Conservation District is a
founding member of the South Texas Weather Modification Association (STWMA).
STWMA is a cooperative organization spanning 10 counties in South Texas. The
goal of the association is to enhance precipitation by adding particles to
clouds – a process known as cloud seeding.

The cloud seeding season runs from about April to October, with most activity happening in the summer when thunderstorms are most prevalent. When atmospheric conditions are favorable for precipitation enhancement, a pilot is dispatched to begin seeding operations. The airplane releases hygroscopic flares containing calcium chloride crystals. Since calcium chloride is a salt, it attracts water vapor until the particles are heavy enough to fall as rain. While this process will not create rain on its own, it is used to augment the rainfall that would otherwise happen during that rain event.

What does this mean for groundwater resources? More
precipitation reaching the surface means higher recharge of the aquifers in the
area. Extra rainfall also means farmers do not have to irrigate as much to
raise their crops. Agricultural use accounts for 76% of groundwater production
in Evergreen UWCD, and the additional 1.7 inches of average precipitation
annually resulting from this weather modification program is beneficial to Evergreen
UWCD’s groundwater users and helps conserve the groundwater resource.

The three participating groundwater districts – Evergreen UWCD, McMullen GCD, and Bee GCD – fund the association through contributions based on their acreage and have seats on the board of directors. Edwards Aquifer Authority is not a voting member, but supports STWMA on a contract basis to enhance precipitation in the San Antonio area. The program receives no federal or state funding.

Evergreen UWCD is taking advantage of scientific modeling and monitoring to better manage groundwater in Atascosa, Frio, Karnes, and Wilson counties. The district contracted for a recently completed study of the Gulf Coast aquifer in Karnes County, and Evergreen UWCD’s board of directors will soon consider amendments to the district rules based on the findings. Evergreen UWCD maintains a comprehensive database system of wells in the district. It also has a district-wide hydrogeological cross-section study that is integrated into the database and is used to help landowners and well drillers understand their groundwater resources and make decisions based on science and data. Evergreen UWCD is in the process of implementing a monitoring program that will include locating monitor wells in Wilson and Atascosa counties to track progress in achieving the adopted Desired Future Conditions of Groundwater Management Area 13. The district will take baseline measurements and then monitor water levels to ensure that the district is working towards its goals.

With a large agricultural user base, expanding oil and gas operations of the Eagle Ford Shale and the Austin Chalk plays (including injection disposal wells), industrial plants, 34 public supply entities, and about 100,000 people, Evergreen UWCD has many things to consider in managing the area’s groundwater resources. General Manager Russell Labus says “Anything you can throw at a GCD, we’ve pretty much got it in our district!”