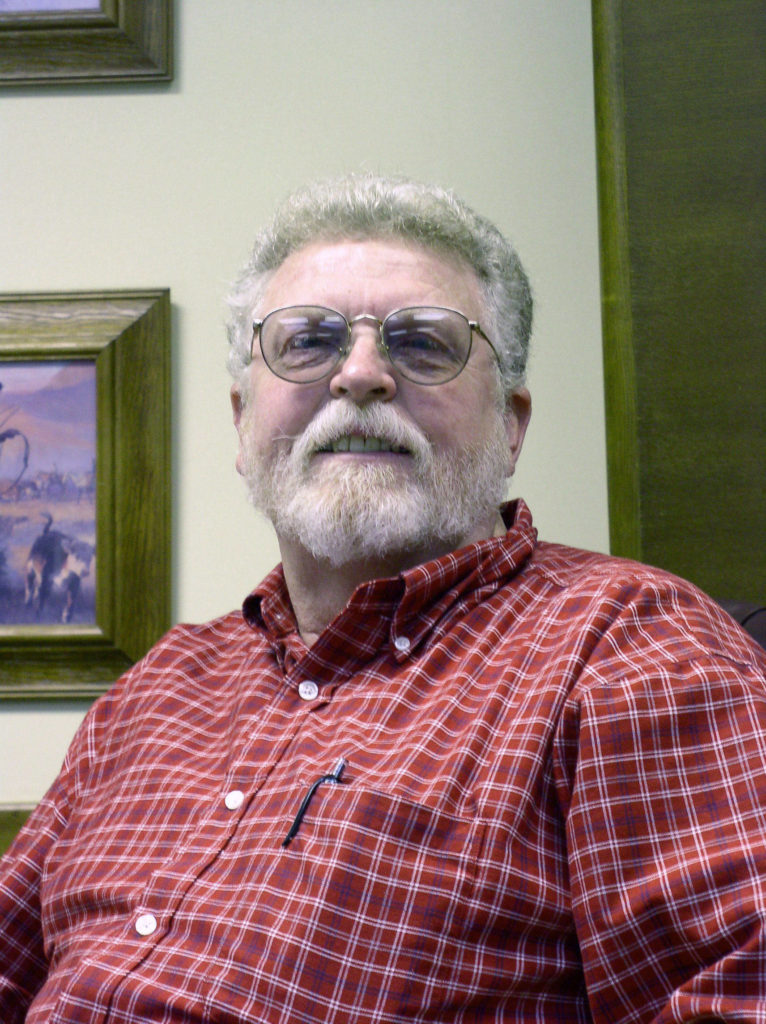 In the groundwater district community, few people are as well-known and respected as much as Richard Bowers.  The current General Manager of Central Texas Groundwater Conservation District has managed three different GCDs in Texas over 32 years.   He was TAGD’s very first president (1988-1990), and served again from 2003 – 2005.  Richard has played a pivotal role in groundwater management on the ground and in the Legislature for many years, and will leave a void in TAGD and the groundwater community when he retires from his district career at the end of August.

In 1979, while working for the USDA’s Agricultural Stabilization and Conservation Service, Richard heard about a job opening at Panhandle GCD from a friend.  He applied and started working as the district’s general manager that fall.   Eight years later, Richard accepted the position of General Manager of North Plains GCD in Dumas, and stayed there for the next 20 years.  In 2007, Richard moved to Burnet to manage Central Texas GCD.

A Career of Service

Richard has left a mark on more than just his districts and TAGD.  He has been a Director of the Texas Water Conservation Association since 1982, and served as president from 1992-1993.  He was also a Director of the National Groundwater Management Districts Association, and served as president of that organization in 1988 and 2001.  Richard is a member of the Texas Ground Water Association and has been a member of the Tarleton State University Hydrology Advisory Council since 1989, currently serving as the Council’s Chairman.

When asked to share stories about Richard Bowers, longtime friend and co-worker Dale Hallmark (North Plains GCD) is immediately reminded of the Will Rogers quote, “I never met a man I didn’t like.”  To Dale, Richard embodies that statement, finding the good in everyone.  Richard’s gregarious, outgoing personality lends itself well to an atmosphere that can be controversial, causing him to win over even the most disagreeable customers.  This attitude towards his fellow man likely spurred Richard’s long-time focus on providing groundwater district services to the community, a theme he implements at Central Texas GCD and one that is still very much at the forefront of his two former districts, Panhandle GCD and North Plains GCD.

Richard has thoroughly enjoyed his career in groundwater management, finding great pleasure when individuals receive benefits from living in a GCD, whether that benefit is in the form of a coliform bacteria test or information on chlorination, individual wells, or the local aquifers.  Richard loves that every day is different and feels a great respect for “the most valuable natural resource in the state.”

So what will Richard do when he retires from Central Texas GCD later this month?  He and his wife Gwen will continue visiting their five grown children all over the world: two sons and one daughter living near Houston, one daughter living in Los Angeles, and one son serving in the U.S. Navy stationed in Japan.  They also love to spend time with their nine grandchildren, two great-grandsons, and one great-granddaughter.  In addition to traveling, Richard plans to spend more time remodeling his home and practicing woodworking.  He has also promised to continue attending TAGD meetings, and we intend to hold him to his promise!

The district was created by the Texas Legislature in 2005 to protect the groundwater resources of Burnet County.  The community confirmed the creation of the District at an election held on September 24, 2005.  For more details about the district, see “District at a Glance,” below.

In addition to Richard, the District currently has two other full-time employees.  Donnita Coats is the resident jack of all trades, serving as the district’s administrative assistant, financial secretary, receptionist, and office manager.  Donnita has previous experience working at Glasscock GCD, and her GCD knowledge has been a very valuable asset to Central Texas GCD.

Mitchell Sodek is the district’s very busy Hydrologist.  He graduated from Tarleton State University with an Environmental Engineering/Hydrology degree in May of 2010 and began working for the District in June of that year.  Mitchell has helped develop reports such as the Trinity Aquifer Characterization and Groundwater Availability Assessment and the Hydrogeologic Assessment of theGranite Gravel Aquifer in Burnet County, Texas.  Mitchell also developed the Central Texas GCD Drought Management Plan and is working on the update to the district’s Management Plan.  Finally, Mitchell handles the District Water Level Monitoring Well program and most of the field operations.

As with many areas of the state, Richard identifies the biggest challenge facing Central Texas GCD as the development of specific information about the local groundwater resources.  The district is currently meeting the challenge head-on, working to obtain more information on the district’s aquifers.

Richard reports that there are only two layers of the Trinity aquifer in the district, and storage is very limited.  The management of the Trinity will therefore be based on annual recharge, as the saturated thickness of the Middle Trinity is less than 100 feet in most areas.  Richard reports that the three minor aquifers in the district are similar and will also be managed on annual recharge.

As for the drought, Richard believes that it’s very possible that some wells will go dry and remain dry until the area receives rainfall to sufficiently recharge the aquifer.  During times of drought, the district uses its water level monitor wells to help determine the necessary stages of the Drought Plan.  Currently, the district is in Stage 3 – Severe Drought.  As with most areas of Texas, the county has seen above normal temperatures and absolutely no rain since June 22nd.

Central Texas GCD at a Glance