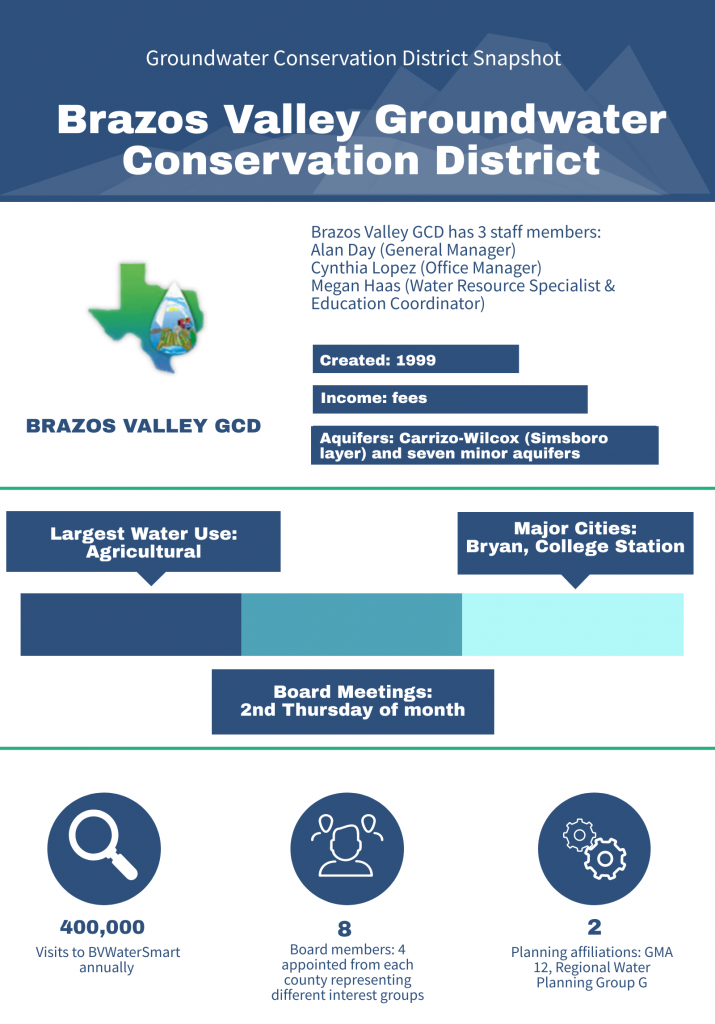 Managing groundwater resources in Brazos and Robertson counties, Brazos Valley Groundwater Conservation District prides itself on its bedrock of science and education.

The Brazos Valley GCD aims to make its permitting process fair to all parties involved and based on the best available science. Brazos Valley GCD made a major investment in aquifer science in 2014 and 2015 when the district partnered with the Texas Water Development Board, other GCDs within Groundwater Management Area 12, river authorities, and environmental groups to update the Central Carrizo-Wilcox/Sparta/Queen City groundwater availability model. The costs of that effort exceeded $700,000 and it has made a significant difference in BVGCD’s ability to accurately project impacts from groundwater pumping. This improved aquifer science has in turn improved the permitting process where BVGCD has experienced a significant reduction in the number of permits that are contested. The district has also developed a 3D model of aquifers to be used as a planning and educational tool, available on the BVGCD website.

Education is
first and foremost in BVGCD’s efforts to conserve and preserve groundwater. Since
2012, BVGCD has made education of elementary and middle school students a top
priority. The district purchased a model aquifer and began going into 4th and
5th grade classrooms in Brazos and Robertson counties. Once the word spread, BVGCD
no longer had to try to sell the education program – teachers throughout the
counties were requesting it!

In 2016, Brazos
Valley GCD sought to increase its outreach capacity with the purchase of a
second aquifer model and the hiring of Megan Haas. The district now reaches
nearly 8,000 4th-7th grade students annually.

One of the
driving reasons behind the success of the education program is the attention to
the material they teach. BVGCD developed their presentations based on state
educational standards for each of the grade levels to ensure that lessons meet
the Texas Essential Knowledge and Skills. BVGCD is the largest user of the
Major Rivers curriculum in the state.

Brazos Valley
GCD has partnered with Texas A&M and the City of College Station to create
BVWaterSmart, a program focused on conserving water by reducing overwatering of
lawns and landscapes. In 2014, the BVGCD board allocated funds for the purchase
of 18 weather station/wireless rain gauges to be placed throughout the
Bryan/College Station urban footprint. These stations report data to a central
host that calculates evapotranspiration in the area. In turn, irrigation
recommendations are provided to Bryan and College Station residents on the
website (bvwatersmart.tamu.edu) and direct email pushes every Monday morning
throughout the irrigation season. The system currently garners over 400,000
visits to the website annually.

BVWaterSmart
was recently awarded both the 2019 Blue Legacy Award and the 2019 Texas
Environmental Excellence Award for Water Conservation. This is an ongoing
project that continues to be fully funded by BVGCD with new projects piloted
occasionally.