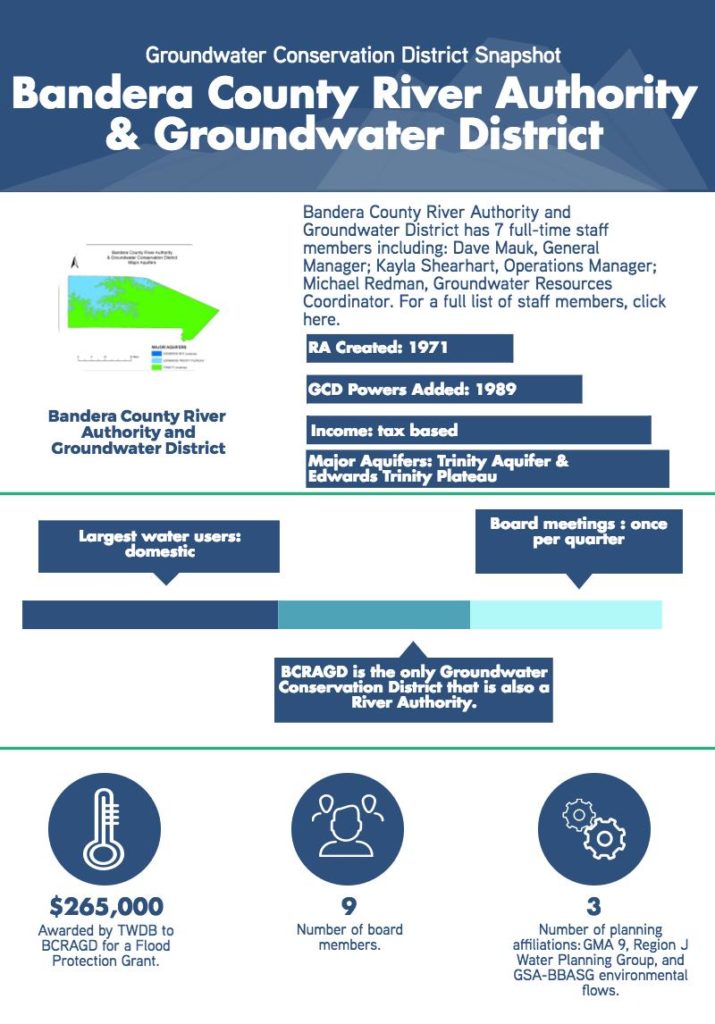 Bandera County River Authority and Groundwater District (BCRAGD) is a unique district. It’s enabling legislation grants them powers under chapter 36, 49 and 51 of the Texas Water Code, making them a groundwater conservation district, river authority, and water control and improvement district. Because of this hybrid nature, BCRAGD engages in a wide range of interesting programs to preserve, protect and prevent the waste of the groundwater and surface water resources in Bandera County.

Bandera County has a history of significant flood vulnerability. In one notable event, the city of Bandera received only 1-2 inches of rain, while the western end of the county received upwards of 30 inches within a few hours. The result was a wall of water that traveled from the upper end of the basin, without warning, inundating the city of Bandera.

To address this vulnerability, BCRAGD recently applied for and was awarded a Texas Water Development Board (TWDB) flood grant to develop and deploy an early warning system in Bandera County. The project combines United States Geological Survey (USGS) stream gauges on the Medina River and a collaboratively financed Light Detection And Ranging (LiDAR) elevation map to produce surface water models with real time predictions and simulations of potential flooding zones in the county. BCRAGD has contracted with USGS to develop this state of the art early warning system, which will be the first of its kind in Texas.

As part of BCRAGD’s ongoing research on local groundwater resources, a study on the possibility of individual aquifer recharge has been in the works for a few years. The concept of individual aquifer recharge is designed to allow rural landowners to inject harvested and treated rainwater into the aquifer, creating recharge, water quality improvement, and some storage for future use.

The research was inspired by an observation of local conditions, which produce intermittent, but heavy rainfall events that go largely uncaptured. Rural landowners rarely possess the storage potential needed to benefit from these rainfall events. The opportunity to find a financially accessible way for rural landowners to store captured and treated rainwater would provide a rural landowner the ability to affect and proactively manage their local resources on a micro level, while improving the overall quality and recharge of the aquifer beyond the Bandera county line. The project has been designed conceptually, and will be seeking approval from Texas Commission on Environmental Quality (TCEQ) to implement a pilot program.

BCRAGD is committed to working collaboratively with their neighbors to ensure that their individual efforts are far reaching. As members of GMA 9, BCRAGD and its neighboring districts in the Hill Country Priority Groundwater Management Area (PGMA) have engaged in an effort to adopt consistent and similar permitting rules. This effort has grown slowly over the years as a response to the public input during the joint groundwater planning efforts. Additionally, BCRAGD is partnered with Blanco Pedernales GCD, Hill Country GCD, and Central Texas GCD in the purchase and operation of a geophysical logging trailer.

The purpose of the co-owned trailer is to enable participating districts to proactively log the geophysical characteristics of the aquifers throughout the hill country, improving knowledge of aquifer locations, characteristics, saturated thickness, depth, production zones and water quality. Increasing data on these characteristics improves aquifer monitoring efforts, and helps districts make better well construction decisions. Furthermore, these districts partnered in the purchase of a down hole camera, allowing districts to investigate the quality of wells for the community. This has been a tremendous asset to BCRAGD in both its enforcement actions, as well as in its value to the community.

As both a river authority and groundwater conservation district, BCRAGD see’s future research opportunities in further

understanding the linkages and interaction between surface and groundwater. Specifically, BCRAGD is interested in conducting a gain loss study using river and groundwater levels, and even age dating of spring water to better understand the recharge functions of the aquifer and impacts of springflow on downstream flows. Understanding how old the groundwater is, how quickly it is recharging, and what amount of recharge off the river is going into the aquifer is an important component to managing the resource.

In a further effort to look at impacts and quality management of both surface water and groundwater, BCRAGD has an active litter abatement program, which allows the district to investigate and enforce on illegal dumping that could impact water quality in the county.