Lindy Harris was awarded an Honorary Membership to the Texas Alliance of Groundwater Districts (TAGD) at the TAGD business meeting on May 27, 2020. 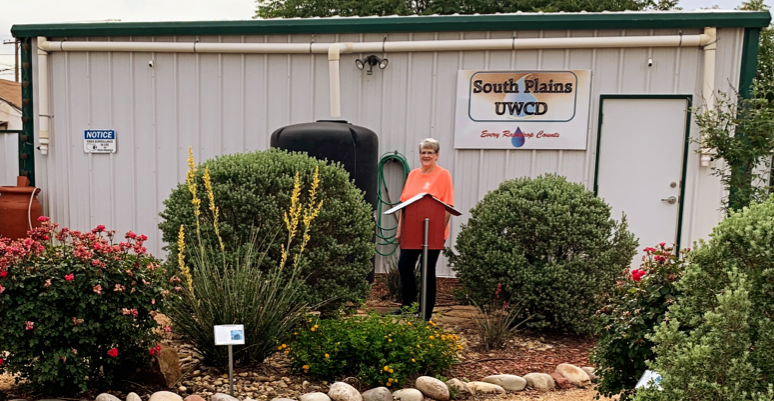 Lindy Harris will retire in August 2020 after over 27 years with South Plains Underground Water Conservation District (South Plains UWCD) in Brownfield, TX. Starting as the district’s secretary in 1993 just months after its creation, Lindy soon came to be known as a passionate force in the community. From diligent faxing of district communications in the days before email, to her later support of innovative water conservation projects, she has left a profound impact on Terry County, the Ogallala aquifer area, and TAGD.

Harris became the General Manager at South Plains UWCD in 2013. In that role, she has led the effort to develop a beautiful garden at the South Plains UWCD office that demonstrates the use of collected rainwater to sustain a variety of plants. The district hosts rainwater harvesting workshops every year and provides attendees with the knowledge and even some of the materials they need to start collecting their rainwater. Under Lindy’s leadership, South Plains UWCD collaborated with agricultural producers, public offices, residences, and businesses to develop their own rainwater harvesting systems to reduce their use of groundwater from the Ogallala aquifer, including one such effort that that won the prestigious Texas Rain Catcher Award from the Texas Water Development Board in 2016 for its use of rainwater for crop chemigation.

TAGD congratulates Lindy Harris on a long career in groundwater management and wishes her well in retirement. She looks forward to spending more time with her grandchildren and tending to her home garden.