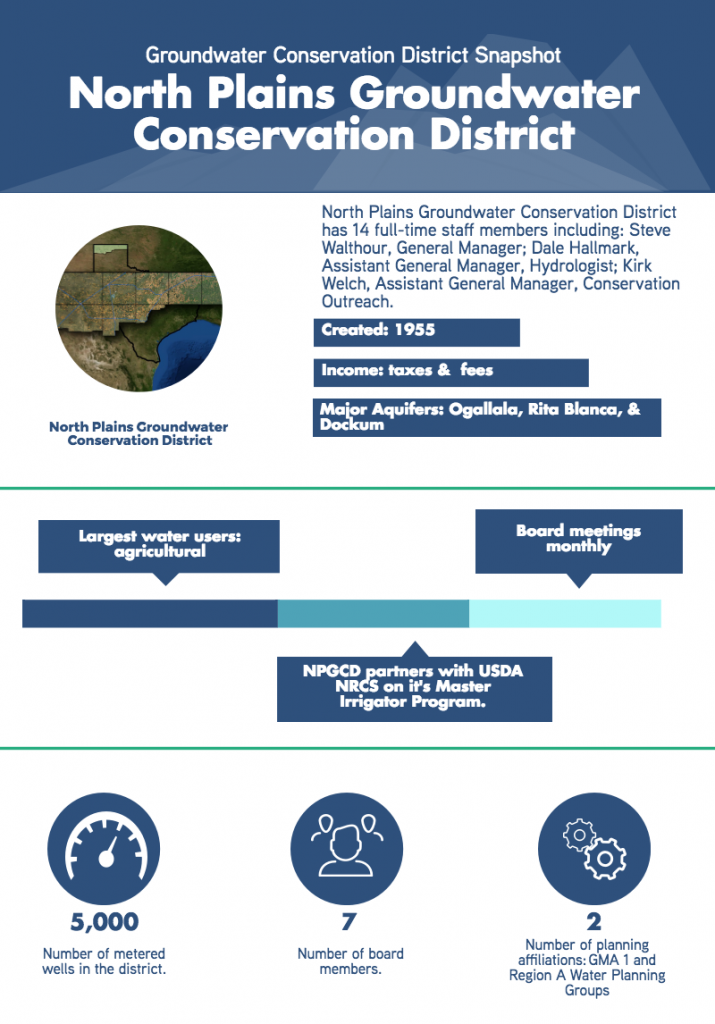 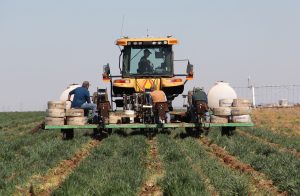 North Plains Groundwater Conservation District (NPGCD) is made up of 8 counties located in the most northern portion of the Texas panhandle. This area of the state sees heavy agricultural production with 95% of groundwater allocations used for agricultural. Agriculture in this area is, however, heavily dependent on its declining groundwater resources. In response, the District’s board has taken a proactive role in conceiving and funding conservation education programs, many tailored to agricultural producers. These programs have been funded in part by grants received from the Texas Water Development Board (TWDB) as well as partnerships with other entities including the United States Department of Agriculture (USDA) Natural Resources Conservation Service (NRCS). Three of the programs that in particular seek to improve conservation efforts are Master Irrigator, 3-4-5 Project, and the Irrigation Conservation Initiative.

Master Irrigator (MI) was envisioned by NPGCD’s board in 2010. They viewed it as an educational extension to the demonstration programs that were already underway in the district. The program seeks to increase adoption of accepted conservation practices by reducing the learning curve associated with successfully applying those practices. The training spans 4-5 days and covers strategies like residue management and optimized planting dates, as well as technologies including soil moisture probes, high-efficiency application systems, remote pivot monitoring and control, and variable frequency drives.

Upon completion of MI, graduates have priority access to a special North Plains GCD Environmental Incentives Program (EQIP) fund made available through a partnership with the USDA-NRCS. So far, almost $700,000 of the $1.6 million fund has been distributed to graduates to off-set the cost of implementing conservation practices in their operations. The 2016 and 2017 MI participants represent 10% of the 1,000,000 irrigated acres in the district, making the impact of improved irrigation decisions substantial.

The third year of NPGCD’s “3-4-5 Gallon Production Maximization (GPM) Corn Demonstration Project” is currently underway. Participants in the “3-4-5 GPM Project” use variable rate irrigation (VRI) to simulate 3, 4, and 5 gallon per minute, per acre irrigation conditions in side-by-side, production-scale demonstrations. The “3-4-5 GPM Project” also utilizes a comprehensive resource management approach including irrigation scheduling and management technologies, maximized delivery systems, conservation tillage practices, hybrid technology, and pest and nutrient management to optimize conditions for water savings and maximum yield. The objective of the project is to provide irrigators with a straight- forward demonstration of conservation techniques and their results.

Through the Irrigation Conservation Initiative, agricultural irrigators in the district have access to funds to assist with the purchase of certain irrigation efficiency equipment including soil moisture probes, pivot monitoring and control systems, telemetry, and on-farm weather stations. The program is made possible by a $300,000 in grants from TWDB’s Agricultural Conservation Grant Program. To qualify for the cost share program, irrigating producers are required to participate in at least one of the district’s educational programs or activities. 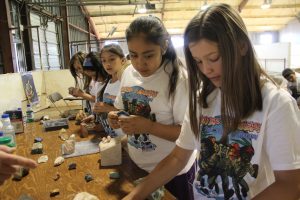 The Ogallala aquifer is being rapidly depleted in the eight counties that make up the NPGCD. According to the district’s hydrologic data, the average water level declines range from 0.8 feet to 4.8 feet. In an effort to more accurately monitor the situation and manage the groundwater resources in the district, NPGCD requires all non-exempt wells and wells constructed after October 14, 2003 to have a flow meter properly installed at each well. Those constructed before the 2003 date may use alternate methods for calculating production. NPGCD’s metering efforts are unique and have significantly improved their management and conservation efforts.

Before flow meters were required, alternative metering methods were used. These methods can, however, have a margin of error of up to 20 percent in groundwater production estimates. The more accurate data collected by the flow meters is not only used by NPGCD, 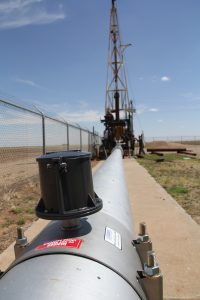 but also by some well owners as a tool to more accurately manage their water production and monitor well health. Meters have also been at the center of the district’s various demonstration projects, helping to measure and showcase best management practices.

The driving force behind the metering rule was NPGCD’s board’s belief in making management decisions based on accurate and robust data. The board determined that the district needed to be able to collect groundwater usage and compliance data in order to be able to accurately track aquifer conditions. Data from the flow meters improves estimates of current and future groundwater needs, directly impacting regional water planning, joint management planning, and achieving Desired Future Conditions (DFCs). With over 5,000 of the district’s 10,000 wells equipped with meters since the rule came online in 2003, NPGCD has found it much easier to calculate and manage to their DFC.

As part of the ongoing partnership with TWDB, NPGCD provides financial assistance through reimbursements for half of the cost of water meters used for agricultural production irrigation. The meter reimbursement is made possible through $1.7 million in grants provided by TWDB. NPGCD has distributed approximately $600,000 to area producers so far to help offset the cost of meters on irrigation wells. The funds are awarded to the district on the basis that meters are an accepted and effective management tool for producers and for groundwater conservation districts.