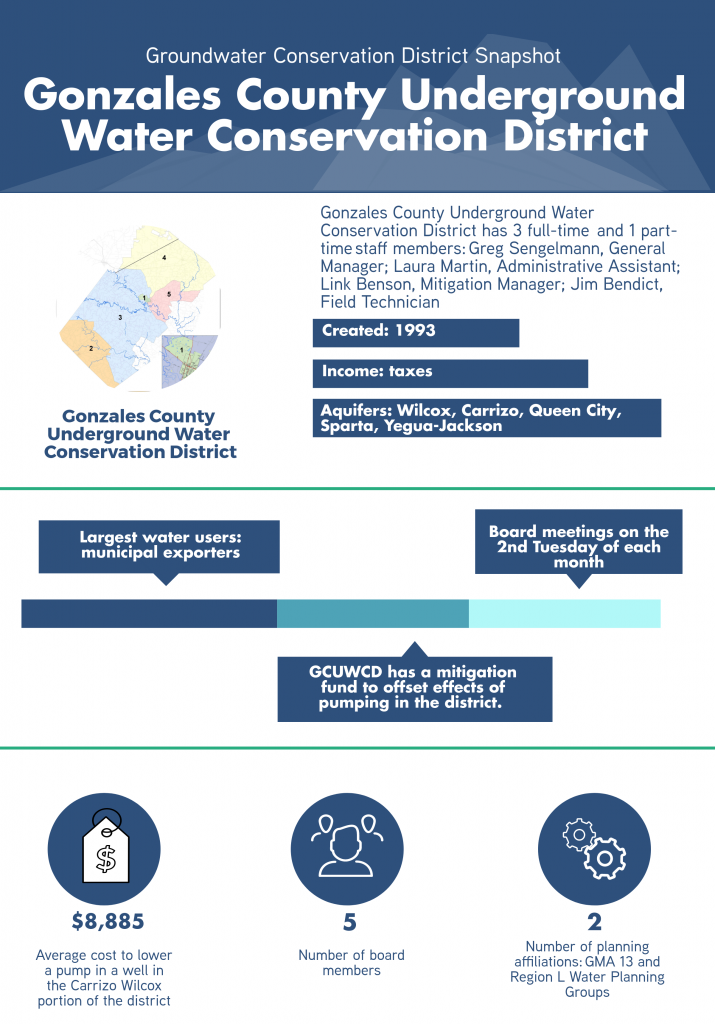 Gonzales County Underground Water Conservation District (GCUWCD) has a unique staff member on its roster of employees: a Mitigation Manager. The district has several large permit holders— San Antonio Water Systems, Schertz-Seguin Local Government Corporation, Canyon Regional Water Authority, Alliance Regional Water Authority, and Texas Water Alliance/Guadalupe Blanco River Authority (GBRA)—who are public water supply exporters. One condition of these export permits is that the permit holder will pay into a mitigation fund that would help to offset the effects of the drawdown caused by the large scale localized pumping. This includes paying to lower a pump in a well or install a new deeper well, if necessary.

The District offers a well plugging program that covers 90 percent of the costs associated with the service.  Costs to date have ranged from $1,662 for a hand dug well to $17,000 for a 2,500-foot water well.

The District has a monitoring well network of over 160 wells to monitor water levels in the Wilcox, Carrizo, Queen City, Sparta, and Yegua-Jackson Aquifers.  GCUWCD also has in place a water quality monitoring network consisting of 73 wells across those same aquifers. The district’s goal is to have 30 evenly spaced monitor wells in each aquifer. Once realized, the district would be able to extrapolate data from these monitor wells to answer questions about water quality or water levels in nearby landowner wells.

GMA 13 has set a new DFC for their aquifers based on percentage of saturated thickness remaining in the aquifer outcrop, rather than the current DFC expressed as a measure of average drawdown across the entire district. Measuring saturated thickness instead of average drawdown will provide the districts with a more accurate picture of aquifer conditions and allow them to better manage the resource.

To help the GCUWCD to achieve this goal, they are working with a stakeholder group of its large permit holders and the Guadalupe County Groundwater Conservation District (GCGCD) and Plum Creek Conservation District (PCCD) on a project to install 19 monitor wells in the outcrop of the Carrizo aquifer extending from Guadalupe County through Gonzales and Caldwell Counties.  In addition, all three groundwater districts are currently involved with an ongoing United States Geologic Survey (USGS)/GBRA surface water-groundwater interaction study and two of the monitor wells will be installed at proposed locations selected by the USGS to assist in the study.

The main purpose of this project is to install a network of groundwater monitoring wells to identify impacts of production in the Carrizo Aquifer outcrop as they relate to the district’s DFC.  A secondary purpose of the project is to collect hydrogeologic data (aquifer thickness, transmissivity, permeability, specific yield, and water quality) across the Carrizo Aquifer outcrop.  Data from the project will be made available to the Texas Water Development Board for possible updates to the Groundwater Availability Model (GAM).

Managed aquifer recharge is the storage of water in a suitable aquifer through surface infiltration or an injection well during times when water is available, and the recovery of water from the same aquifer during times when it is needed. Expanding the use of our aquifers could assist groundwater districts in sustainable aquifer management and help meet the demands of Texas’ growing population.  The GCUWCD collaborated with the Guadalupe Blanco River Authority (GBRA) on research into whether a managed aquifer recharge project might be feasible on the Carrizo Aquifer outcrop. Specifically, GBRA was looking to capture excess river flows in times of high rainfall events and introduce those flows into the Carrizo outcrop through enhanced surface infiltration for future use.

GCUWCD is centrally located along one of the fastest urban population growth corridors in Texas, placing water resources within the district in high demand to serve the growing communities around it. The GCUWCD has responded to this need for water in alignment with its management plan goals of conserving, preserving, and protecting the aquifers while ensuring everyone gets their fair share and everyone’s property rights are protected.

While this creates additional need for monitoring of the aquifer, it has also created opportunities for collaboration between the district and its stakeholders, through venues like the mitigation fund and the monitor well network.